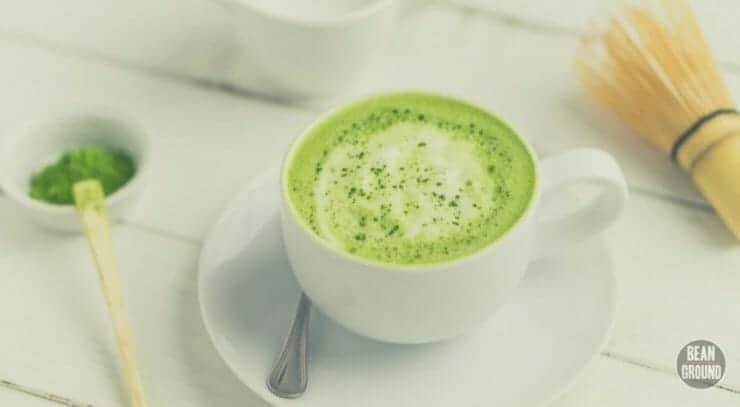 Does Matcha Latte Have Caffeine?

Matcha latte is a relatively new addition to coffee shop menus, and since it first appeared, this bright green beverage has seen a considerable rise in popularity in a short span of time. Its loyal followers crave the uniquely earthy, nutty, and often bitter flavor.

But I’ll be honest. Matcha is an acquired taste, and it’s not coffee but rather a tea. If you enjoy green tea, you’ll more than likely love Matcha.

It can be slightly bitter, but give it a chance. Once you get used to the unusual flavor, it’s actually a delicious alternative to coffee.

In case you’re considering swapping your cup of coffee for a matcha latte next time you hit your local cafe, you might want to take a few seconds to find out how much caffeine a cup contains.

Does matcha latte have caffeine? If so, how much? Keep on reading and find the answers to these niggling questions and more.

Before we dive in, let’s take a closer look at “matcha” – what is it really?

Matcha is a widely popular drink in Japan and is made from young green tea leaves of the Camellia sinensis plant.

The plant is grown in the shade, which helps increase the amount of chlorophyll the plant contains, giving matcha its distinct bright green color.

Once the leaves are picked, they are dried and then ground into a very fine powder. 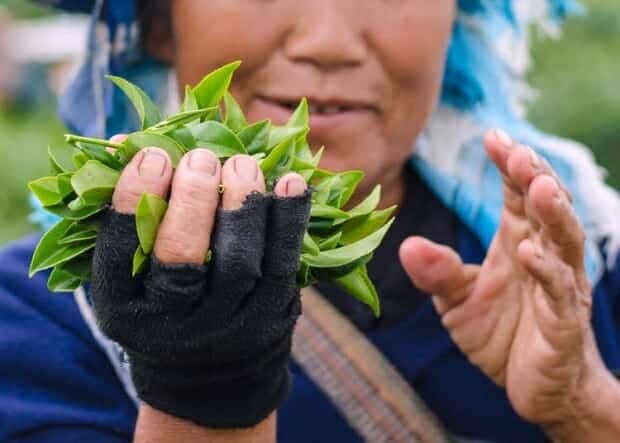 To make a cup of matcha, fine powder is added to hot water and whisked, often with a small natural bamboo brush, to produce a frothy beverage – it’s then enjoyed like regular green tea.

Prefer a latte? Creating a matcha latte is also simple, just replace the water with steamed milk and whisk.

Matcha is becoming increasingly popular, mainly due to the touted health benefits associated with green tea.

However, according to a report by Zion Market Research, the global matcha market could be valued at a whopping $4.83 billion by 2024.

How Much Caffeine Does Matcha Have?

Because matcha is essentially green tea ground into a powder, you can expect the caffeine levels to be very similar but not the same. Here’s why. 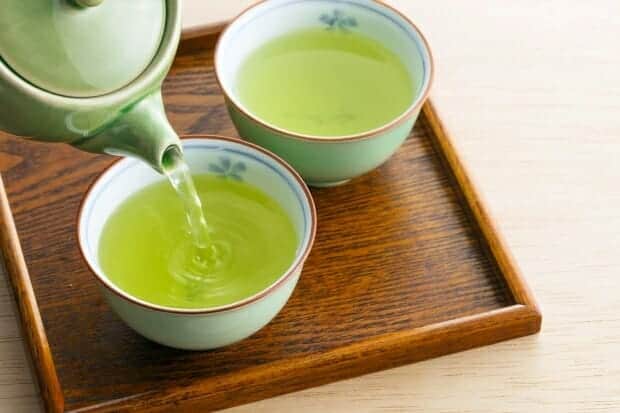 You will get a bigger caffeine kick than regular green tea because you eat the tea leaf rather than infuse it in water.

That’s all well and good, but due to the various ways matcha is processed, and the additional ingredients added, each product can vary significantly in caffeine content. There is no “set standard” of how much caffeine each product should contain.

Cheaper quality matcha is often mixed with other ingredients and tends to contain very little matcha.

These “diluted brands” can have as little as 17 mg to 10 mg of caffeine per serving. Whereas with good quality matcha green tea powder, you can expect it to have around 64 mg per 8oz cup.

So depending on the brand of matcha powder you purchase, you could be consuming a good amount of caffeine or, unfortunately, very little.

Unlike coffee beans, where you already have a good idea of how much caffeine you are drinking, matcha is really hit or miss. It’s best to read the back of the packaging for the “real” caffeine content.

Does Matcha Have More Caffeine Than Coffee?

Matcha and coffee, which has the higher caffeine content? Coffee contains more caffeine than matcha per serving. An average matcha latte contains an average of 63 mg of caffeine per serving.

That’s considerably less than the equivalent cup of coffee, which contains around 95 mg of caffeine. 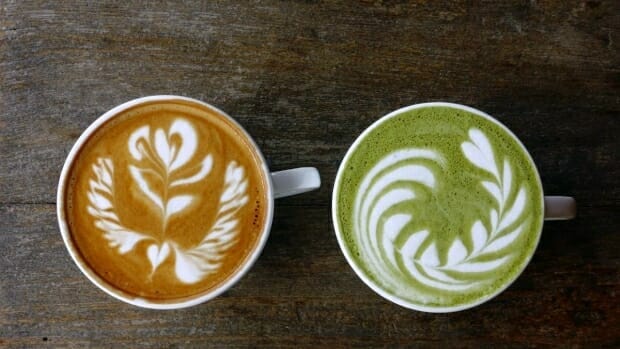 Also, it’s worth noting that you tend not to get a “caffeine crash” with matcha.

I’m sure you’ve been there before.

You quickly drink your coffee for a quick hit of energy, only to come crashing down later, leaving you a shaky mess.

With matcha, that doesn’t tend to happen – here’s why.

Matcha contains an amino acid called l-theanine – coffee doesn’t. This amino acid helps your body absorb caffeine more slowly, and instead of a sudden burst of energy, the l-theanine found in matcha has more of a calming effect.

If you’re sensitive to caffeine or have a sensitive stomach and find regular coffee too acidic, a cup of matcha may be a great alternative that still offers some caffeine.

Matcha can be a good option for people who enjoy caffeine in the morning to prise open sleepy eyes but want to avoid a caffeine crash in the afternoon. 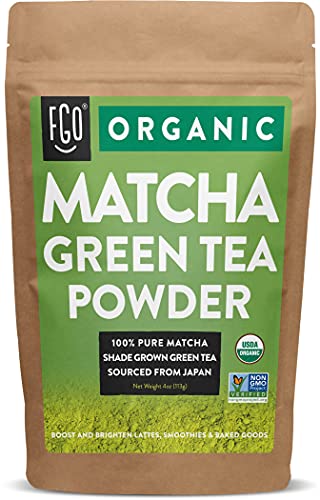 Matcha tea comes loaded with antioxidants and other goodness that coffee just doesn’t have – If you are not all that into coffee, matcha latte is a great option.

If you can’t wake up without a cup of hot coffee first thing in the morning, stick with it but swap out your afternoon coffee with a matcha latte for a more calming pick-me-up.

Here at Bean Ground, we love our brewed coffee, preferably black. But recently, I have been enjoying different teas, and matcha is one that’s found its way onto my desk in the afternoon as I sit and type.

📌 Does Starbucks Matcha Have Caffeine?

📌 Is There Such A Thing As Decaf Matcha?

Yes. If you shop around, you can find decaf matcha. You can enjoy your matcha green tea latte without worrying about the caffeine content.

However, if you intend to drink decaffeinated matcha, keep in mind that removing the caffeine also removes some of the antioxidants and other goodness found in green tea.

📌 Can You Get Decaf Matcha At Starbucks?

You can buy decaf matcha powder, but unfortunately, Starbucks doesn’t serve it. All of their matcha lattes (iced and hot) contain caffeine.

How To Keep Coffee Hot For Absolutely Ages

There is nothing worse than a cold cup of coffee, drinking lukewarm coffee isn’t the best experience in the world, and it’s probably one of the biggest reasons why coffee is poured down the sink. Let’s be honest, It...

The humble cup of coffee has evolved and completely changed over the centuries. For a beverage that was once just a simple breakfast stable, it has grown into a multibillion-dollar global industry of specialty shops and...