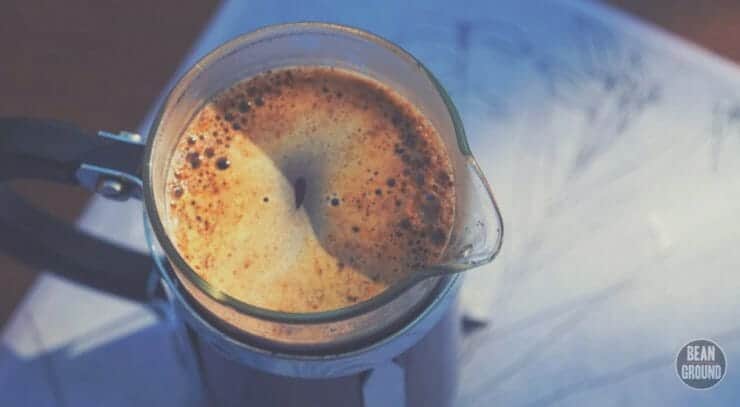 Why Is My French Press Coffee Grainy?

The French press is one of the most iconic methods of brewing coffee at home, and when you do it right, it produces a great-tasting cup. The beauty of the French press is its simplicity; you simply grind your coffee, add hot water, and you’re all set.

However, this full-immersion style of coffee brewing isn’t without its flaws. Despite its simplicity, one of the main complaints I often hear is why is my French press coffee grainy or gritty.

There is a simple explanation. The sediment in your cup is caused by the brew method and the filter.

In this article, I will delve a little deeper into this phenomenon and give you a few tips on how you can reduce the likeliness of sediment and coffee grounds making their way into your cup.

What Makes The French Press Different

Unlike other coffee brewing styles where hot water is typically poured over a bed of ground coffee, the French press uses a steeping process, otherwise known as full immersion.

This act of immersing ground coffee directly inside hot water can cause a grittier coffee with visible sediment in your cup if it isn’t filtered adequately.

French press sediment is essentially minuscule coffee ground particles that don’t dissolve. But without the grainy grit and sediment, the French press wouldn’t be the same; some people love it, and some people hate it – a bit like Marmite! 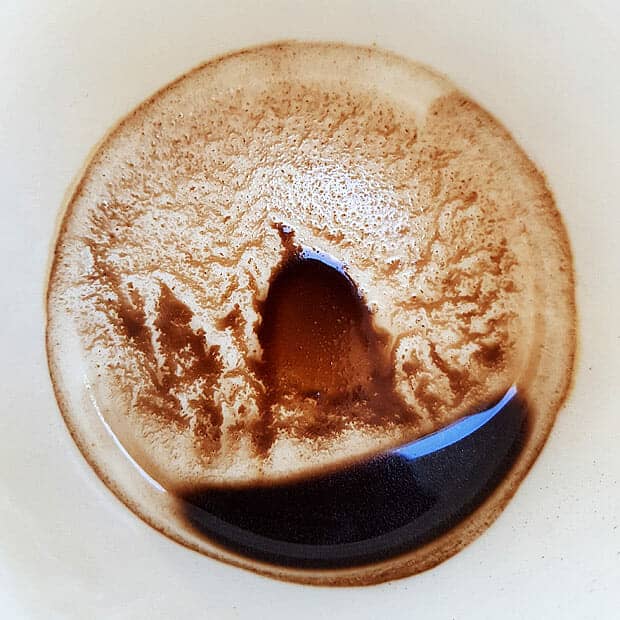 This undissolved grit actually serves a purpose in the grand scheme of things.

For starters, the coffee sediment helps tone down the acidity by bonding to the acids dissolved in the water during the brewing cycle.

In a sense, it’s a trick of the brain. When you drink French press coffee, your tongue will process the slightly bitter microscopic grit before the acid, and your brain then interprets the flavor to be less acidic overall.

The sediment, grit, and grainy mouthfeel are the trademarks of this brewing style and produce the boldness that you crave from French press coffee, which isn’t found in almost any other brewing method.

See, French press sediment isn’t all that bad, even though it might not be enjoyable to drink.

If you enjoy French press coffee but would instead do without the grainy sediment, here are a few pointers to help reduce the sediment while still enjoying this immersion-style of coffee brewing.

Due to the type of mesh filter utilized in the French press, tiny particles of ground coffee are almost always bound to slip through. Try adjusting your coffee grinder to a slightly more coarse setting to reduce this. If possible, invest in a good quality burr grinder that will produce a much more even and consistent grind.

A coarser grind will be larger, and it will have a hard time slipping through the filter. By making this small change, you will notice a lot less grit and grainy sediment in your cup.

A big reason why your French press coffee is grainy is due to the speed at which you push down on the plunger.

The mesh filter does a reasonably decent job of keeping sediment at bay. However, if you forcefully push down the plunger, fine coffee sediment will be expelled around the mesh filter, where it touches the glass carafe, as well as through the filter mesh.

A slow and steady push on the plunger will eliminate almost 90% of the grit and sediment, which would otherwise land in your cup if you tend to push down on the filter plunger forcefully.

Don’t be in a rush to pour the coffee. Allow the French press to settle for a few minutes. Even though they do float, micro-grounds are denser than brewed coffee. So when left to settle, they naturally sink.

You can actually see the grit and sediment fall to the bottom if you look closely.

4. A Slow Pour Wins Every Time

The more you disturb the coffee trapped underneath the filter, the more chance coffee grounds will slip through or around the filter.

If all else fails, try skimming the top of the coffee before you plunge.

If your coffee is fresh, there should be a noticeable “bloom,” carefully remove this with two large spoons before plunging. I find that this makes a more flavorful coffee taste that’s far less bitter and has less sediment and grit.

This might be a little too much work, but sifting your coffee grounds through a metal filter before you add them to your French press will reduce any small particles and uneven grounds.

You will have a cleaner cup, but the mouthfeel of the coffee will be slightly different due to there being less sediment and solids in suspension.

You can reduce the amount of grit in your cup by leaving the last 60ml (roughly 2 oz) in the press. If you try and squeeze every last drop out of the press, you’ll almost always get the sediment, grit, and sludge too.

8. Buy A French Press With A Double Filter

Over the years, I have tried what seems like an endless amount of French presses, but nothing has come close to the Espro French press.

The Espro press has an entirely different style of micro-mesh filter that leaves your brewed coffee smooth and incredibly grit-free. It’s really impressive! 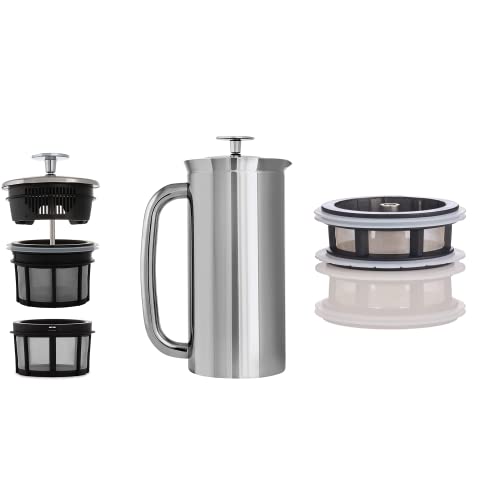 I’m sure you’ve all had a cup of French press coffee that has been left for too long steeping? If you have, you know just how bitter tasting it can be.

Are you looking for the best French press? The Espro is worth checking out for sure!

Although the grainy sediment might not be pleasant, it’s actually the life and soul of the French press, and without it, your brewed coffee wouldn’t be the same. If you want to try and reduce the likeliness of residue ending up in your cup, try a few of the above pointers.

If you still find the grit unbearable, try switching to another coffee brewing style like the Clever Dripper or the AeroPress. Both use the same full immersion brewing style but rely on paper filters to remove the grit and sediment while keeping most of the flavor intact.

How to Make Perfect Espresso Crema? (The 5 Golden Rules!)

If you want to learn how to make crema, this article is an excellent place to start and a solid foundation for any aspiring home barista. A good crema is the holy grail of any espresso coffee, giving your shot of...

I’ve never been an advocate for instant coffee. With so many quick coffee brewing methods on hand, like the AeroPress, anyone can brew a great-tasting cup of coffee in about the same amount of time. But, I do...