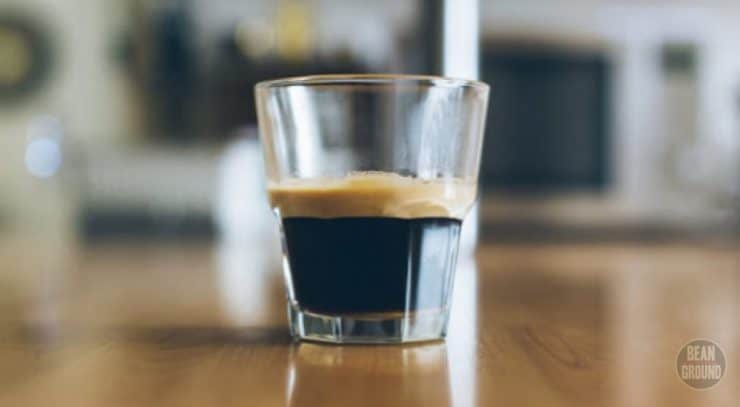 What Is A Lungo? Understanding Your Espresso Coffee

Espresso, Ristretto, and now Lungo? It can all get a bit confusing with so many different coffee drinks being touted at your local coffee shop. What exactly is a Lungo? You may have heard the term Lungo, and you may have seen it on the menu, but what does it mean?

In this article, I’m going to arm you with all you need to know about Lungo coffee; everything!

By the time you’ve finished reading this, you will know how it’s made, how it tastes, what makes it different, and even the caffeine content of a Lungo (well, my best guess anyway).

I will try and keep this post short. This is an explanation of the espresso Lungo.

What Does Lungo Mean

Let’s start with the basics.

In Italian, Lungo (pronounced LOON-goh) literally means “long.” So, from the standpoint of a novice, we can determine that the espresso will be larger than a standard shot with the word long, indicating the amount of time needed to pull the shot of espresso from a machine. 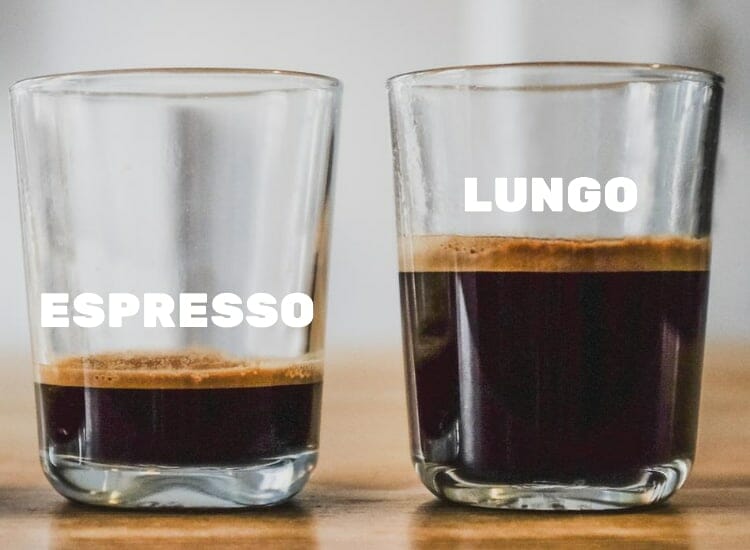 How Is It Made

So now you know what Lungo means, how does it become longer?

Simply put, it all comes down to the amount of water used to pull the shot of espresso. A Lungo is a slight variation on a regular espresso shot.

It is larger and less intense in flavor but often I find it to be more bitter than a standard single shot of espresso.

A regular classic shot of espresso calls for 1 ounce (30ml) of water with a pull time of 18 to 30 seconds.

However, a Lungo requires double the amount of water, and more water means a longer pull time – about a minute to pull a coffee Lungo.

In the cup, the Lungo looks very similar to the size of a Doppio (double shot of espresso), and often the two can get confused for one another. A nightmare for any novice barista!

Due to the popularity of Lungo coffee, many of the best espresso machines now come with a built-in preset for it – making a Lungo is as simple as pressing a button.

Nespresso machines, for example, even sell dedicated Nespresso Lungo pods that are pre-filled with the optimum amount of coffee, so it takes the guesswork out of the brew ratio.

However, true coffee geeks will prefer to use a manually operated espresso machine that requires a bit more skill and collaboration to pull a perfect Lungo.

Variables such as pull time, coffee ground size, and the amount of water required all play a role in pulling a Caffe Lungo.

You can leave the variables you have locked in for your regular espresso, and tweak and play with the water and pull time until you hit the sweet spot!

This is a whole different ball game for most people, so a Nespresso coffee machine or an entry-level espresso machine with presets will be the best option to master the Lungo with minimal difficulty and a decent crema.

How Many Ounces In A Lungo

A Lungo is 1 1/2 to 2 ounces. Remember, a Lungo can take up to a minute to pull with a regular espresso machine, which means there is more water than a regular double espresso and it will taste less intense.

However, to make things even more complicated, Nespresso has thrown even more confusion into the mix.

The Lungo on a Nespresso machine is set from the factory at 3.75 liquid ounces (10.90ml). Whereas a textbook Lungo, a barista would pull about 2 liquid ounces (60ml).

I’m not sure why Nespresso has decided to choose the size they have? But you can calibrate your Nespresso machine yourself to serve 2 liquid ounces for your pods and reset to factory defaults at any time.

A Lungo tends to taste slightly more bitter than a typical espresso drink or smaller Ristretto due to the more prolonged extraction, allowing for more bitter compounds to be present.

Also, with the longer exposure to water, you will find that many “high” and delicate notes are muted in a Lungo compared to a regular espresso.

The higher levels of bitterness can be attributed to specific compounds in the coffee dissolving later due to the increased amount of water introduced to the coffee.

These compounds would typically not have time to dissolve when pulling a normal espresso shot and are left behind.

I can describe the taste of a Lungo as being more bitter, smokier, and you’ll be able to pick out more of the elevated roasted notes not usually detectable.

If you enjoy a bitter-tasting coffee, I’m sure you’ll enjoy a Lungo – they’re bitterer and bigger than espressos.

As with most coffee beverages determining the exact amount of caffeine can be a challenge.

The origin or the type of coffee (Robusta/Arabica, for example) can play a significant role in just how much caffeine is in a Lungo.

However, what I can say is that a Lungo should contain more slightly caffeine than a regular shot of espresso – the bigger the coffee, the more caffeine you will have.

Caffeine is soluble in water and is one of the first components to be extracted in your coffee. Therefore, the more contact the ground coffee has with water, the more caffeine you will ultimately have.

But there will always be a cut-off point when pulling too much water through your coffee will yield no more caffeine because no more can be extracted.

So, we can confidently say that a Lungo will have higher caffeine levels than a smaller Ristretto or espresso shot.

That all depends on the variables at play. However, taking Nespresso Lungo pods as a simple example where the variables are pretty much standard, I can say you will get about 77 to 85 mg of caffeine per serving with regular Lungo capsule varieties.

But the stronger Kazaar coffee pods (Robusta coffee bean) will contain almost double the amount per Lungo shot at 125 mg of caffeine.

Content Navigation show
1 What Does Lungo Mean
2 How Is It Made
3 How Many Ounces In A Lungo
4 Lungo Coffee Taste?
5 Caffeine Content In A Lungo?
FacebookTwitterPinterestLinkedInEmail

We are gathered here today to honor the memory of Mr. Blonde. Whoa. Scrap that. Are dead espresso shots actually a thing? Anyone who enjoys a rich and creamy espresso shot is likely familiar with the term “dead...

Are you wondering if that dusty old bag of coffee is bad? Does coffee go bad or expire after so long? And how long does coffee last? Those questions and others are answered in this article. What I can say now is that...

The humble cup of coffee has evolved and completely changed over the centuries. For a beverage that was once just a simple breakfast stable, it has grown into a multibillion-dollar global industry of specialty shops and...

One of the hardest things to master when you first start out in the coffee brewing world is coffee grind size. Apart from using the correct water temperature and ensuring your beans are measured accurately, grinding...