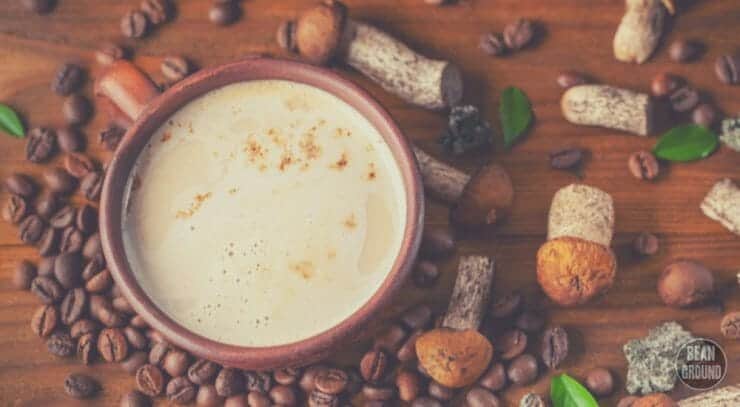 What Is Mushroom Coffee: Should You Add Fungus?

First came bullet butter-filled coffees, then cold brews were the healthiest way to enjoy coffee, and somewhere along the line, a Unicorn made an appearance!

But now, mushroom coffee is being touted by bearded baristas as the newest trendiest health drink that we should all be drinking.

Sure, I’ve heard of adding butter to coffee, coconut oil, and even raw eggs but adding mushrooms to coffee has to be one of the strangest combinations yet. When I think of mushrooms, I usually associate them with stews, stir-fries, or being deep-fried in breadcrumbs and garlic – not with coffee.

So how did this strange coffee concoction came into existence, and why is it supposedly a good idea?

As crazy as it sounds, stay with me, and I’ll get to the bottom of this mushroom madness!

What Is Mushroom Coffee?

Apart from the obvious – ‘coffee with mushrooms added’ – An 13th-generation farmer Tero Isokauppila, the founder of Four Sigmatic (and really the pioneer of this niche), says that adding mushrooms to coffee is an excellent way to fortify your morning brew.

Four Sigmatic were founded in 2012, and in many ways, have spearheaded the modern mushroom coffee craze.

They’re on a mission to make the world’s healthiest coffee by processing wild mushrooms into super-concentrated extracts, which are then blended with regular coffee. 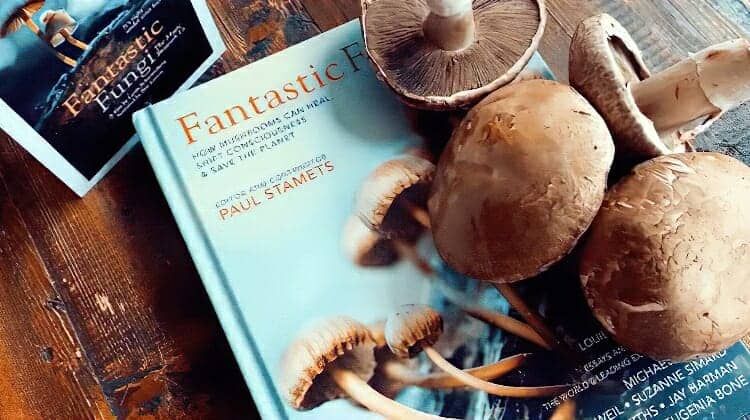 I have tried drinking mushroom coffee, and I must admit it does taste pretty delicious.

After digging around a little more, I discovered that this coffee mushroom infusion offers significant health benefits, especially when combined with other ingredients. Let’s take a closer look.

Coffee is one of the top sources of antioxidants, and in fact, research has shown that a cup of coffee may contain more anti-aging and disease-fighting antioxidants than a cup of herbal tea, black tea, and green tea.

Mushrooms also contain a large number of antioxidants, especially ergothioneine and glutathione. So by adding mushrooms to your coffee, you’re packing a double punch of antioxidants in every cup.

The antioxidants found in coffee beans and mushrooms also provide defense against free radicals that we’re exposed to in our day-to-day lives (like air pollution).

These free radicals cause oxidative stress to humans, which can cause cell damage in our bodies.

It’s widely believed that oxidative stress plays a big role in many serious and chronic diseases such as heart disease, cancer, Alzheimer’s, Parkinson’s disease, diabetes, and even eye diseases like cataracts.

Certain components found in the Chaga mushroom have been shown to help revive the immune system and influence anti-tumor and anti-cancer activity.

Once eaten, these polysaccharides act as prebiotics in the digestive system, helping aid in digestion in many ways.

In various animal studies, beta-glucans have been shown to help decrease glucose levels, body weight, and cholesterol in diabetic mice.

There are many popular coffee mushrooms, but one type you’re more likely to find is the reishi mushroom.

The reishi mushroom is a rich source of adaptogens that can aid liver function and may even help prevent liver disease by encouraging the toxins to be thoroughly flushed from the body.

A study published in the International Journal of Medicinal Mushrooms discovered that the reishi mushroom helps induce hepatoprotective effects on acute liver injury and helps to fight harmful immune responses that slow down liver function.

Best Coffee Mushrooms To Add To Your Brew

Not all mushrooms are equal, and there are some that you should definitely NOT add to your coffee unless you enjoy being chased by Large Pink Elephants In Speedos (trust me, that was not a good experience!).

But don’t fret. I have done the legwork for you and found four superfood mushrooms that go perfectly with coffee. 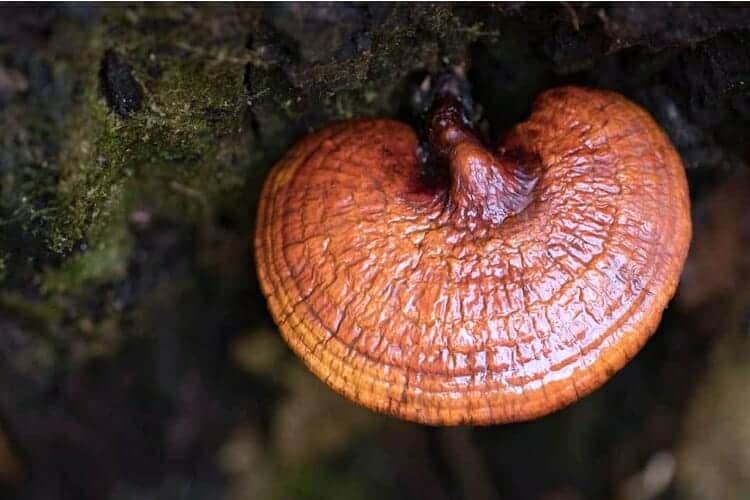 Reishi mushrooms are widely known in East Asian medicine for their medicinal properties. These mushrooms are a favorite with royals and the elite due to their rarity.

These mushrooms are called Lingzhi in Chinese and Reishi in Japanese, so when you’re digging around your backstreet Chinese health store, you know what to look for! 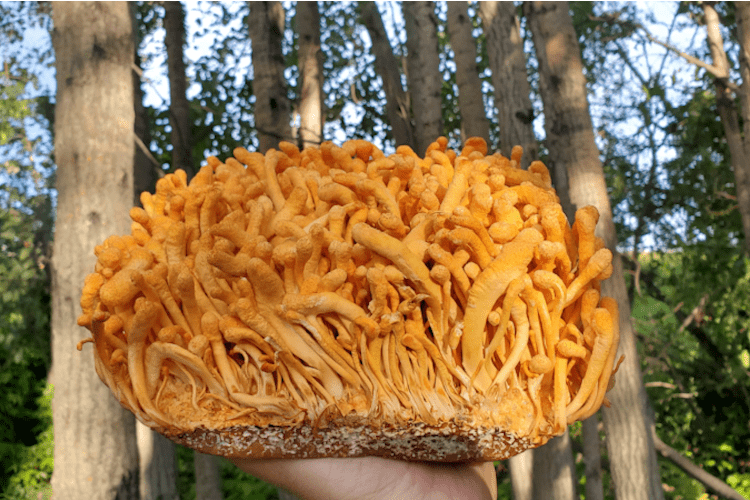 Cordyceps aren’t technically mushrooms but are classed as parasites, meaning they invade the bodies of insects or other fungi and use the new host as their growth base. (yuk!)

The most well-known species is the Ophiocordyceps Sinensis or Yartsa Gunbu or “Winter worm, summer grass,” as known by the Tibetans. The Yartsa Gunbu Cordyceps have been used in Tibet since the 15th century as an aphrodisiac.

Among all the exotic mushrooms in the world, the Cordyceps must be one of the strangest, but don’t let that put you off – go on, add some to your coffee! 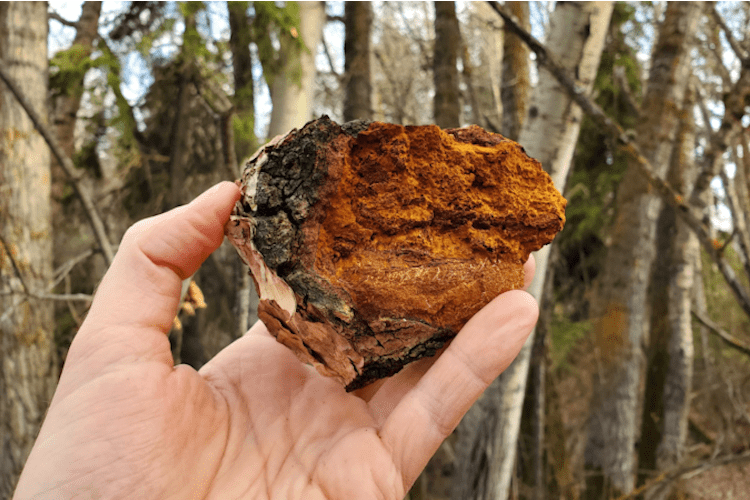 The Chaga mushroom is a strange-looking mushroom that’s typically found on trees and loves colder climates.

Chaga is known for its many health benefits, such as Beta-D-Gluca, which has been found to boost the immune system and inhibit the growth of tumorous cells.

A study found that Chaga mushroom extract induced selective apoptosis in humans, meaning that it could target and kill tumor cells without damaging healthy cells.

– it literally can hunt down the bad guys in your body. Chaga mushrooms also have excellent antiviral properties that can help protect cells from certain illnesses. 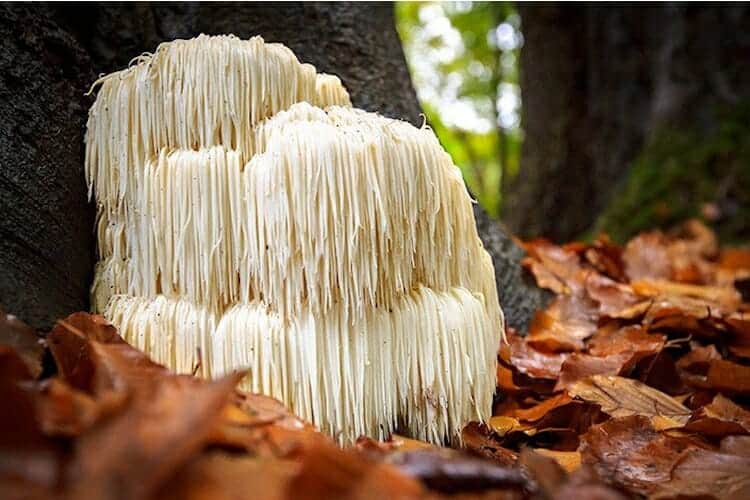 You can see how this mushroom got its name! Lion’s Mane is found on the branches of hardwood in many regions of the world, where it has many amusing nicknames such as satyr’s beard and pom pom mushroom.

However, Lion’s Mane is most widely known in traditional Chinese medicine, where it is praised for its anti-inflammatory and cognitive-enhancing properties.

This mushroom is packed full of vitamins and minerals, and other bioactive compounds that promote good health.

This is a great mushroom brew base that can be supercharged with other ingredients.

This super easy coffee mushroom recipe uses a combination of dried mushrooms and other ingredients such as honey or ginger that you can tweak to your liking.

Getting your hands on some of these hard-to-read funky ingredients might seem daunting, but trust me, most of these can be sourced in a health shop or online.

This mushroom recipe makes one big batch of immune-boosting mushroom goodness that can be kept in your fridge for a week. – trust me, it doesn’t last long!

A few uses: Add to your coffee instead of water (try adding it when you brew coffee in a French Press) or add a few spoonfuls to your regular coffee and stir or if you’re feeling experimental, you could use it to make a mushroomy cold brew coffee.

Too Much Work? Try This

If you’re convinced this coffee mushroom infusion is something you want to try but you’re too busy to put in the legwork to make it yourself, you can use a great-tasting instant mushroom coffee product by Four Sigmatic (remember I talked about these ‘funguys’).

We Recommend This Product

The Four Sigmatic mushroom coffee combines lion’s mane mushroom, Chaga mushroom, and coffee in one instant coffee sachet. Just add with hot water and sweeten or add milk or cream or any other ingredients you like.

Butter In Coffee Isn’t As Crazy As It Sounds

Why would anyone want to put a chunk of fatty butter inside their coffee? I know, right. I thought the same thing until I gave this coffee concoction a try out of boredom, and I’m glad I did. Even though this butter...

I get it not all of us have enough time in the morning to carefully grind whole coffee beans and painstakingly prepare a Hario V60 or any other pour-over coffee brewer. This is why instant coffee is so popular, for...