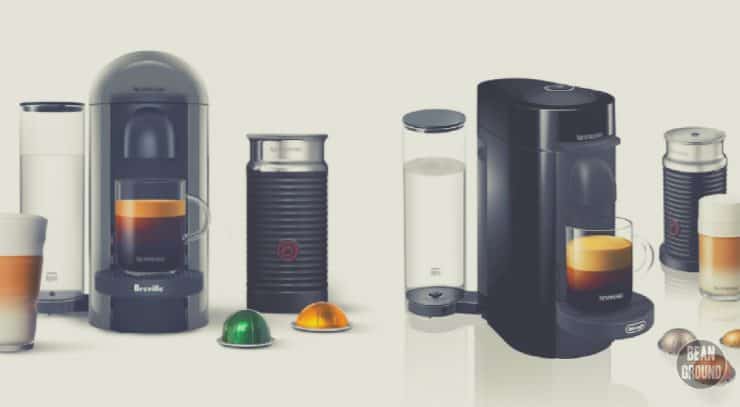 Nespresso Delonghi vs. Breville: Is There A Difference?

So you’ve decided that you want to buy a Nespresso machine. After looking at different models, you’ve quickly realized that both Delonghi and Breville manufacture the same espresso machines.

– What’s the difference? Is one Nespresso machine better than the other? Which should you choose?

Shopping for a Nespresso machine is more confusing than it needs to be.

But don’t worry, you’re not the first person to struggle with understanding the differences between Nespresso machines or the first to be baffled by Nespresso’s manufacturing partnerships.

In this article, I hope to clear up some of the confusion. By the end, you will clearly understand the key differences and which coffee machine is the right choice for you.

So let’s dive in.

You would think that a Nespresso machine is made by Nespresso. Wrong.

All of the machines you see on the store shelves or the Nespresso website have not been manufactured directly by Nespresso.

Nespresso invented the machines. But when it comes to manufacturing, Nespresso subcontracts that out and relies on other “established” companies to churn out the machines at their factories.

Because Nespresso machines are sold around the globe, the manufacturers differ, depending on the region they are being sold.

Delonghi and Breville are the most popular companies manufacturing Nespresso espresso makers, and in most cases, it’s going to be one of these you encounter when you’re buying one.

However, brands such as Krups, Miele, Siemens, or Magimix also produce Nespresso machines, but they don’t seem to be popular.

Typically when you purchase a Nespresso machine in a retail store, it will be either a DeLonghi or Breville – and that’s why you often hear the terms “Nespresso by Breville” or “Nespresso DeLonghi” machines.

If I had to guess, I bet this is what you have heard; it has caused confusion and sent you on the hunt for answers.

When you buy a machine directly from the Nespresso website, only the “Nespresso” branding is shown on the machine.

Those machines have still been manufactured by either Delonghi or Breville, but the branding is removed and only displays the Nespresso name.

The only way you can tell them apart is by how they look. So yes, Nespresso machines look different depending on who has manufactured them.

The design differences with each coffee maker are very subtle.

For example, the Breville’s VertuoPlus machine typically has a more rounded top than the Delonghi equivalent’s square aesthetics.

Nespresso By Delonghi Or Breville Which Manufacturer Is Better?

Even though the Nespresso machines may look slightly different, they both have the same Nespresso technology powering the inner workings underneath the hood.

The espresso coffee is exactly the same. The Nespresso pods fit all and taste no different if you own one of the Delonghi coffee makers, Breville, or one of the other approved manufacturers.

So that hopefully answers your question regarding which is better – the answer is each Nespresso model will be the same.

The only question you should be asking yourself is which Nespresso will look nicer sitting on your kitchen counter.

The design is the only difference between the Nespresso machines – they operate the same way and make the same coffee.

Things Get A Little More Complicated

That should be the end of the confusion regarding both the Delonghi and Breville Nespresso machines – but there’s a bit more to it than that.

KitchenAid, for example, manufactures its own Nespresso coffee maker that looks completely different from the others in the Nespresso range.

And on top of that, both Delonghi and Breville also produce their own range of Nespresso machines that are unique to each brand. These feature milk frothing functions to aid in making a latte or cappuccino, or any other milk-based coffee drink.

You won’t find these on the Nespresso website, but only through Breville’s or Delonghi’s sales partners.

They feature a few more desirable features that are not found on Nespresso machines.

Some come with an integrated steam wand or a milk frother, and other models feature a push-button milk dispenser that adds milk directly into your coffee.

The machine will produce the complete beverage with just a button press, albeit a cappuccino or latte.

Both the Creatista Uno and the Creatista Plus come with a milk steam wand so you can froth your milk for both cappuccino or a latte.

However, they are not a one push-button solution like the DeLonghi. Instead, you will have to froth your milk separately and add it to your freshly brewed coffee. 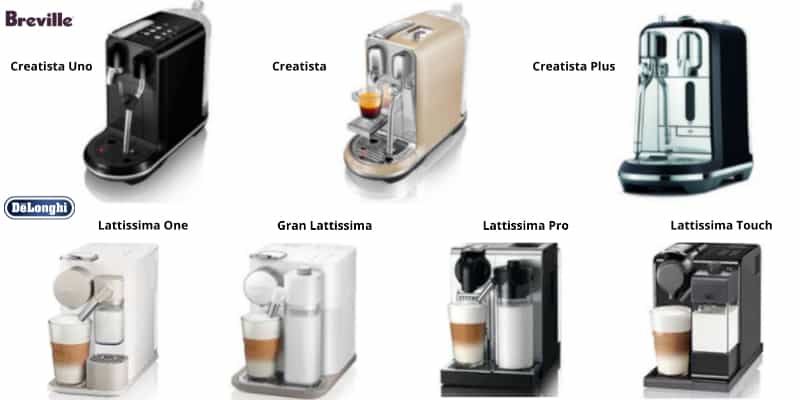 Should You Get A Breville Or Delonghi Nespresso Machine?

Putting the unique lines to one side and getting back to the actual Nespresso coffee machines that Delonghi and Breville manufacture. The range includes Nespresso Pixie, the Inissia and Essenza Mini, Citiz, Vertuo, VertuoPlus and Nespresso VertuoPlus Deluxe.

These are all produced by both Delonghi and Breville. As I have already mentioned, the insides of the machines are all the same; the only differences between them are slight cosmetic design changes.

A Nespresso machine manufactured by Breville, for example, might have a more squarish design. On the other hand, the Delonghi equivalent might have a more rounded top and a more extensive range of colors to choose from.

At the end of the day, both will produce the same tasting coffee, they take the same Nespresso capsule and function the same. You need to decide on which color and design you prefer.

📌 Is Nespresso Made By Delonghi?

Nespresso machines were invented by Nespresso but they are made/manufactured by other companies such as Breville and Delonghi.

The same machine made by different manufacturers will have the same underlying Nespresso technology inside and the original specifications. The shot of espresso will taste the same from any machine no matter who made it.

📌 Is Nespresso Made By Delonghi?

Nespresso invented Nespresso machines, but they are made/manufactured by other companies such as Breville and Delonghi.

The same machine made by different manufacturers will have the same underlying Nespresso technology inside and the original specifications. Therefore, the shot of espresso will taste the same from any Nespresso machine, no matter who made it.

📌 Which Nespresso Machine Is Better, Breville’s And Delonghi’s?

For example, the Nespresso VertuoPlus by Breville has a dome-shaped top, whereas the model manufactured by De’Longhi has a flat one.

📌 Which Is The Best Nespresso Machine?

This question is subjective; each person will prefer one espresso machine over the other depending on their requirements.

But our recommendation when choosing the best Nespresso coffee maker would be any manufactured by either Delonghi or Breville – they have the best range and stay true to the original Nespresso.

However, if you’re looking for a Nespresso machine that can steam and froth milk, the Nespresso Creatista range by Breville wins.

📌 Should I Buy The Nespresso Original Or Vertuo?

📌 Which Nespresso Machine Makes A Latte?

If you enjoy a Latte or Cappuccino and want to create milk-based coffee drinks at home just like a barista, then the best Nespresso machine would be the Vertuo.

This machine comes bundled with an Aeroccino milk frother and lets you make a coffee shop-quality drink in the comfort of your own home.

Content Navigation show
1 Who Makes Nespresso Machines?
2 Nespresso By Delonghi Or Breville Which Manufacturer Is Better?
3 Things Get A Little More Complicated
3.1 Nespresso Lattissima by DeLonghi
3.2 Nespresso Creatista by Breville
4 Should You Get A Breville Or Delonghi Nespresso Machine?
5 FAQs
FacebookTwitterPinterestLinkedInEmail

If you love espresso, you really should add one of these coffee makers into your brewing arsenal. Both the Moka Pot and the Espresso Machine are capable of making an espresso, but only one can make an actual espresso...

What Milk Is The Best For Frothing?

Are you trying to master a perfect cappuccino at home but struggling to foam your milk? It seems no matter what you do, the milk just won’t froth. Those bearded tattooed baristas make it look so easy. Don’t...