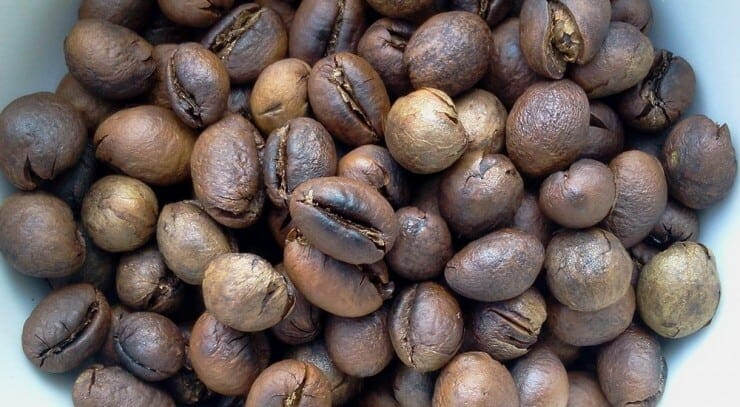 What is Peaberry Coffee – Are They Better Than Regular Beans?

When I first discovered my passion for quality hand-ground coffee it was like I had unearthed a whole new world as well as a new language. Everything from brewing gear, ratios, temperature, grind size, and of course coffee beans.

One of the first coffee beans I found myself puzzling over was simply labeled as Peaberry. Being new to the world of coffee and still trying to decipher the basic information on the bags of whole beans I presumed Peaberry was just another name for a coffee grown in a certain part of the world.

However, as my knowledge progressed I came to realize that simply wasn’t true. There’s a bit more to Peaberry coffee than you may think.

I’m sure you’ve also stumbled across the name “Peaberry” when looking at different varieties of coffee. You’ve probably also asked yourself why is the Peaberry more expensive than regular coffee? and what makes the Peaberry better than regular beans?

If you have a head full of unanswered questions regarding this type of coffee bean you’ve landed on the right page. In this, in-depth guide I’m going to unmask this mystery coffee bean and arm you with all of the information you could ever need. After reading through this I’m sure you’ll have more knowledge of the Peaberry than your local barista!

If you didn’t already know, coffee beans are a fruit. Just like other fruits coffee beans also have a fleshy part and seeds. The coffee beans that we all know and love are actually the two seeds found in the flesh (the coffee cherry). These seeds are compressed together within the husk which is what gives them the one flat side and a rounded side, but this isn’t always the case.

Peaberries are the result of a genetic mutation that causes the two seeds to not develop correctly which typically results in just one seed surviving and becoming more rounded. They’re also usually smaller than typical seeds.

The final coffee bean when roasted doesn’t resemble a regular coffee bean, it has no flat sides and looks more like, ..well a pea, hence the name “Peaberry”.

This genetic mutation is rare and no one has been able to completely understand what causes this freak transformation, but one thing we do know is that Peaberries usually make up less than 10% (1) of all coffee beans processed. It’s partly due to this rarity that makes them more expensive than regular coffee beans. 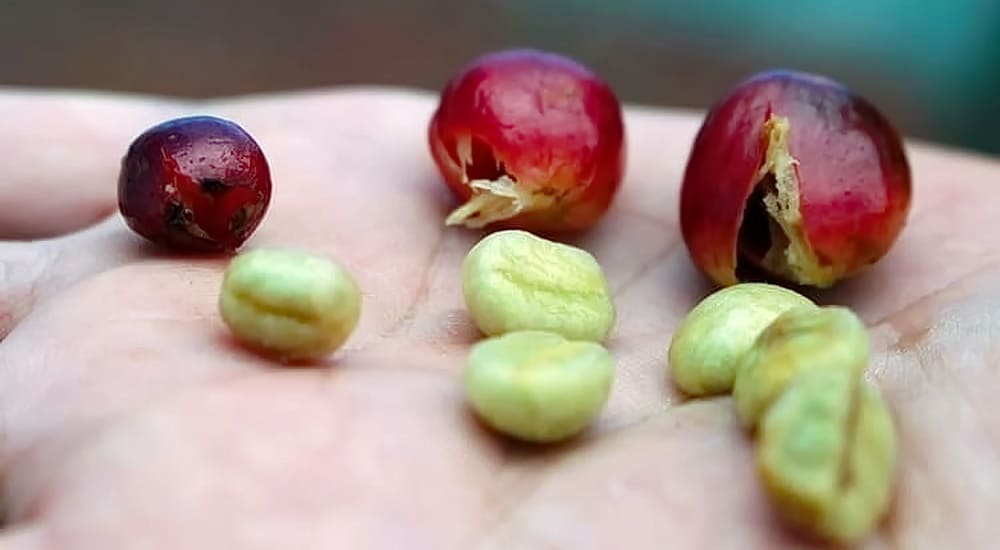 Due to the fact that the single Peaberry is the only seed in the fruit, it will get all of the nutrition that would have otherwise been shared with two. The end result is a bean that is dense and harder than a regular coffee bean.

Due to the distinct characteristics Peaberries roast slower than other beans from the same crop, so they have to be sorted and removed prior to roasting.

Where Does Peaberry Coffee Come From?

The quick answer is Peaberries can come from anywhere!

Every single coffee cherry has the potential to become a Peaberry, remember what I had discussed above, it’s only a genetic mutation. Countries that often have higher numbers of Peaberry coffee beans are places such as Brazil, Kenya, Colombia, Ethiopia, and Tanzania to name just a few.

Typically, Peaberries are discovered when the coffee is being processed and sorted (2). With that said, some countries do report higher numbers of Peaberries but this isn’t because of the location it’s simply due to higher coffee production in these areas and better sorting during the roasting stage.

The sorting process is almost always carried out by hand, nothing is better than the human eye at spotting a mutated Peaberry among thousands of regular coffee beans.

Besides the rarity of the Peaberry, human sorting also adds to the superior price.

How Do Peaberries Taste?

Here’s where I’m going to burst your bubble. Once you pull back all of the marketing hype that’s often attached to Peaberries what you’re really left with is a mutated coffee bean from the same bush as regular coffee beans.

Do they taste different? Yes and no, for the coffee nerd with a seasoned palate and an appreciation of taste and flavor the Peaberry is going to produce a slightly different cup when compared to normal beans from the same crop. This slight difference is no way supported by all of the marketing hype as well as the premium price that is often attached.

In all honesty, if you didn’t know you were drinking Peaberry coffee you wouldn’t be able to tell the difference and Kenneth Davids (3) over at Coffee Review also agrees.

Sure, you’re going to find people who are extremely passionate about Peaberry coffee and they will argue until they’re blue in the face that this unique type of coffee bean is superior to the unmutated bean.

They will splurt out unbacked claims that the Peaberry coffee bean is packed with more flavor when compared to regular coffee. They may also say that because this bean is not divided and it’s only a single bean it has more caffeine and has a sweeter taste due to higher sugar content.

I agree, there might be a very slight difference in taste but for the likes of you and me this isn’t going to be noticeable to an extent that demands a higher price.

By all means, if you haven’t already, try Peaberry coffee, but don’t be surprised if the taste and overall experience are less dramatic than you were led to believe by the packaging and bold advertising.

After reading through this I hope you now have a better understanding of what Peaberries are and why (as far as I’m concerned) are not worth the additional cost which is almost double what you pay for the unmutated coffee of the same origin.

I do not believe there’s an exceptional taste difference that will make you run out of the door just to buy a bag of Peaberry coffee beans and the is no reason at all to switch to just drinking this type of coffee over regular coffee beans,

They are, after all, just genetically flawed, but rare coffee seeds, from the same crop. So, next time you open a fresh bag of coffee beans check and see if you’ve got a few Peaberries mixed in there. If you do, congratulations you’ve won the Peaberry lottery!

The humble coffee bean comes in many forms, it can be roasted to a range of different profiles and can be brewed using a vast array of techniques. But, before any of that can happen, the coffee has to undergo a...

Let’s be honest, most of us want to live healthier, longer, and more active lives. Simply, choosing the healthiest option on a food menu or buying food and beverages that are organic is where many of us can make small...

There’s no getting past the fact that Nespresso machines are hugely popular. With a quick insert of a capsule and a push of a button, you have a delicious cup of coffee. Some of the high-end Nespresso machines...