How many of you stick your nose into a freshly opened bag of coffee beans? I know I do, the smell is out of this world. There’s nothing better than the smell of fresh beans they smell good enough to eat – have you ever tried to eat coffee beans?

Sure coffee smells great but do they taste good, is it even possible, can you eat coffee beans? I’m sure many of you reading this have pondered the same exact question each time you open up a fresh bag.

The short answer is yes, absolutely, you can eat coffee. Which is probably great news for most of you who have thought about it, and those of you who already have it’s probably a sigh of relief and you can go and cancel that doctors appointment you had booked for Monday morning. 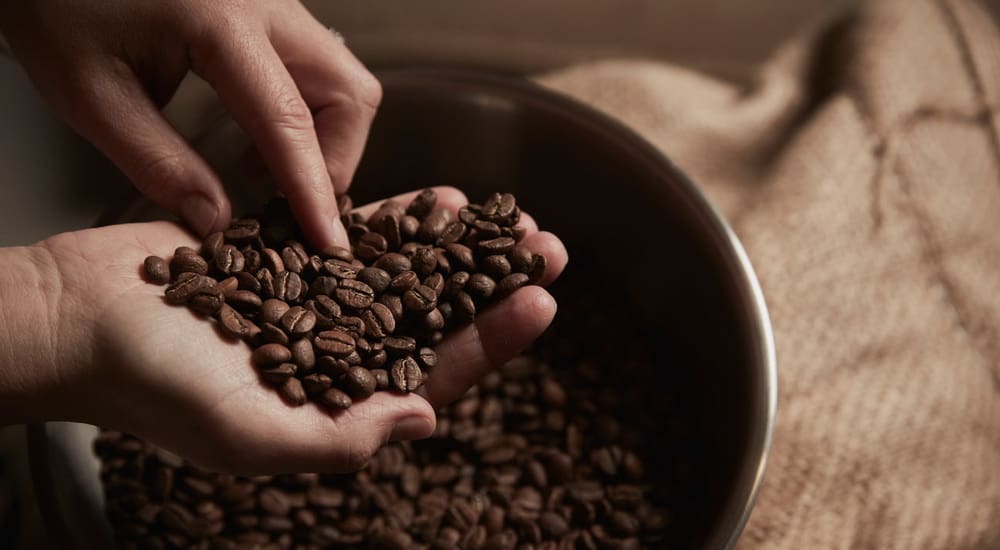 The truth is, we, humans, have been eating coffee beans long before we decided to brew the beans with hot water. There are many accounts of animals introducing coffee to humans, by chance.

One tale talks about an Ethiopian goat-herder Kaldi in the 9th-century who noticed that his goats were becoming energized after eating red berries from a bush. After trying the mysterious berries for himself and feeling the eye-opening effects he took them to a nearby monastery. There’s more to that story, but that’s the gist of it.

So in a roundabout way, what I’m trying to say is yes eating coffee beans is perfectly okay and we have been doing so for decades. So if you want to chew your coffee rather than brew it keep on reading because I have all of the essential information on this caffeine packed snack!

What Actually Is A Coffee Bean?

Before we get ahead of ourselves it’s probably a good idea to talk about the actual coffee bean – what is it?

If you haven’t already guessed. Coffee beans are the seeds of the coffee fruit (the cherry). After the fruits are picked they are then processed to remove the outer flesh to reveal the seed (the coffee bean).

These raw, green, coffee beans are then dried and roasted to the desired roast level (dark to light) and then they are then packaged and arrive on our kitchen countertop ready to brew.

But what you are all really here for is to know about eating coffee beans – so let’s crack on.

There are many types of coffee. There’s raw (or better known as green coffee beans), roasted, and even coffee beans that have been covered in chocolate – so can we eat them all? 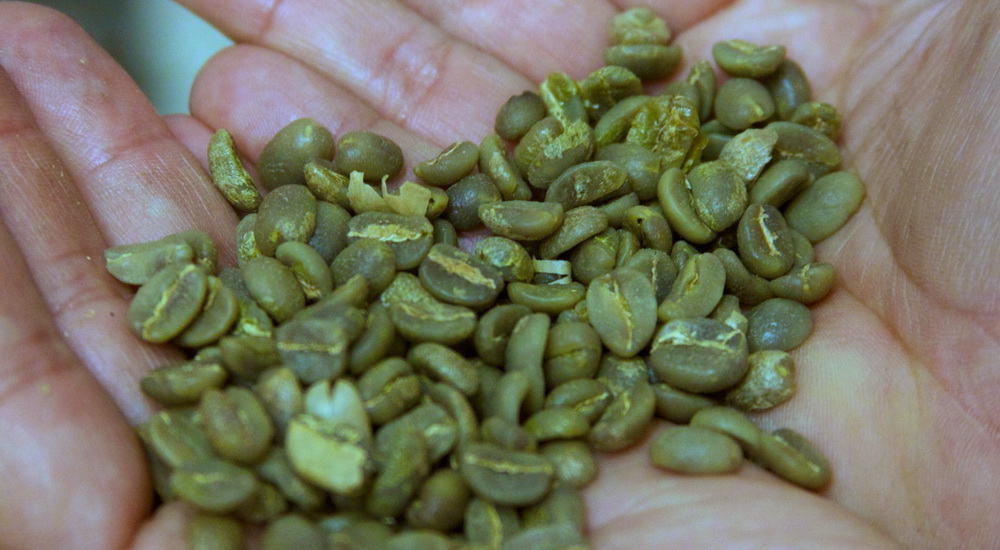 Starting from the purists form, straight from the pant and dried, I’m talking about green coffee beans; can you eat them?

Yes, you can, but, you probably aren’t going to like the taste.

Raw, green coffee beans have a woody, grassy flavor and are extremely acidic. Plus, if that wasn’t enough to put you off, they are hard, a lot harder than roasted coffee beans. So if you enjoy the flavors of wood and grass and don’t mind losing a tooth go ahead and give them a try – they’re safe to eat, but why would you want to?

You could try making a brew with green coffee beans, but, even then you will most likely end up with a bitter tasting cup.

There’s a reason why we roast coffee beans. The roasting process turns the raw bean into a thing of beauty, it brings out the caramelized flavors that we associate with coffee – and the reason why will enjoy it so much. 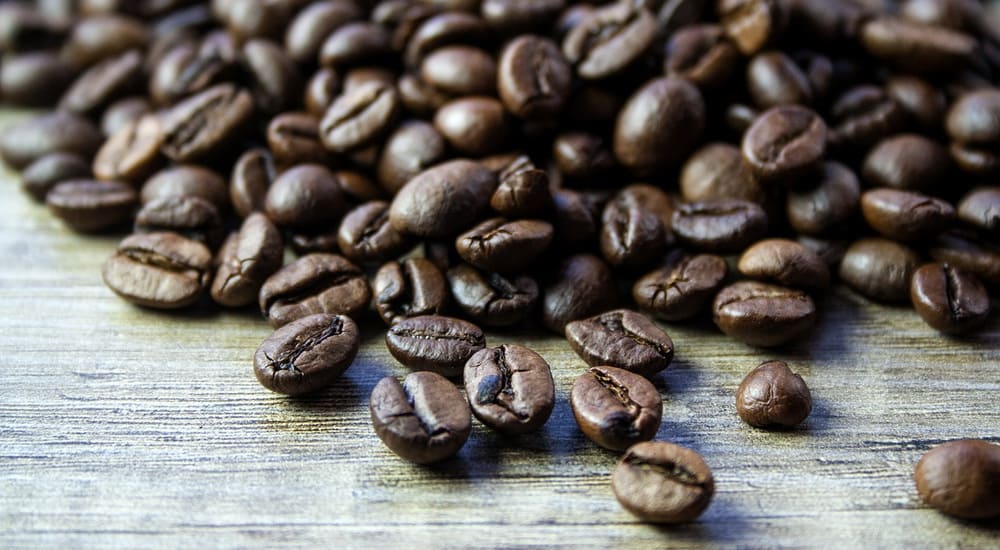 So, can I eat roasted coffee beans? Yes, you sure can, and they taste great but don’t go overdoing it.

However when you eat a whole bean you’re getting it all, so throwing a handful of whole roasted coffee beans into your mouth isn’t probably going to be a good idea.

Eating coffee beans, not a problem, but in moderation, unless you enjoy climbing up the walls of your house like spiderman!

Chocolate and coffee – aghhh a marriage made in coffee heaven.

As you’ve probably already guessed eating chocolate covered coffee beans is okay, in fact, I recommend you run out the door now and grab a bag – they are delicious!

Chocolate covered coffee beans are basically roasted beans that have been dipped in chocolate. The chocolate helps to take away some of the bitterness and feels more like something you should be eating – trust me you won’t get as many strange looks by your coworkers.

Is It Healthy To Eat Coffee Beans?

Coffee, in general, has had a bit of a rollercoaster ride when it comes to its health benefits. However, current research seems to suggest that coffee has many positive health benefits that outweigh the negatives (Yay!).

One of the pluses for coffee is the high antioxidant content, in fact, most Americans, get almost all of their antioxidants from coffee than any other dietary source. Coffee beans are naturally high in dietary phenolic antioxidants. It’s these compounds that help to protect us from inflammation, cardiovascular disease, and a host of other conditions.

Sure, you can find antioxidants in other food sources but coffee is known to be an excellent source – plus we drink the stuff daily!

What Are The Risks Of Chewing Down On A Coffee Bean?

Coffee beans contain hundreds of healthy substances. Brewed coffee has been linked to a reduced risk of Parkinson’s disease, diabetes, gallstones, and some other disorders.

But, as the saying goes too much of a good thing can be bad for you. So even though coffee has its health benefits it also comes with a few negatives.

When it comes to eating coffee beans consuming too many in a short period will most likely see you locked up in the bathroom for an extended period of time – coffee is known for its laxative properties.

Coffee beans contain many compounds, such as caffeine and catechols, that are known to boost the production of stomach acid. Regular brewed coffee can cause heartburn, so if you suffer from any of these chewing a whole bean is probably going to make your condition worse.

Increased cholesterol from drinking coffee is well documented and some brewing methods are better than others. However, when eating coffee, rather than drinking it, can lead to increased production of low-density lipoprotein (LDL) – that’s the bad cholesterol.

This is due to two compounds found in coffee, cafestol and kahweol, which are 10 to 40 times greater in whole coffee beans than in watered-down brewed coffee.

And finally if you’re pregnant or if you’re breastfeeding you should limit your caffeine intake, but hey I’m no doctor, so if you are unsure it’s best to seek medical advice.

All of these negatives are not just isolated to eating coffee beans, drinking coffee will also carry the same risks.

Life’s too short to worry – go grab a cup of coffee or better still, eat a handful of coffee beans.

What Are The Best Coffee Beans To Eat?

You can chomp down on almost any coffee bean but medium to dark roasted beans may be more enjoyable from a flavor point-of-view.

If you’re looking for a caffeine kick I recommend that you chew on a handful of lightly roasted coffee beans. Lighter roasts typically contain more caffeine, don’t just take my word for it the National Coffee Association also agrees.

Personally, I would suggest that you pick up a bag of chocolate covered coffee beans rather than just munching a regular bag of coffee.

Can I Eat Coffee Grounds Instead?

Yes, you can eat coffee grounds but I’m not sure why you would want to unless you enjoy picking coffee grounds from your teeth – you better stock up on some floss!

It’s one thing to chew on a whole coffee bean, which is rather pleasant, and then there’s spooning handfuls of ground coffee into your mouth – not so pleasant. You get the picture.

There was actually a 1995 study in the American Journal of Clinical Nutrition that looked specifically at the effects of consuming used coffee grounds. Their findings after 3 weeks showed that blood cholesterol increased by an average of 26 points.

Food for thought – for sure.