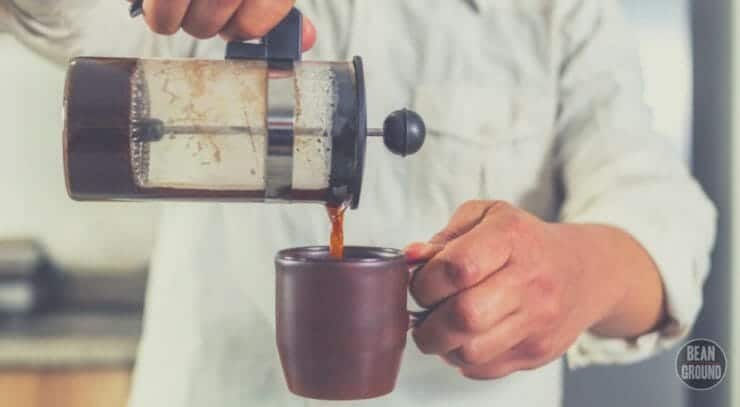 French Press Alternatives Which Are Actually Easier To Clean

Do you love the full-bodied French Press coffee but can’t stand the clean-up.

I hear ya! Removing those wet compacted coffee grounds can be a real pain in the butt.

But what if I told you that you can still enjoy the same style of full immersion coffee but with a lot less mess and clean-up.

There aren’t many coffee brewers that can replicate the French Press, but there are a few.

After you’ve tried one of these, you’ll wish you had discovered them sooner.

Once we better understand the specific brewing technique, the below alternatives will make more sense.

What is full immersion, I hear you ask?

The key is in the name.

Ground coffee is immersed in water and left to brew for a set amount of time.

So instead of controlling the pour, which you would do with other coffee brewing methods, with immersion, you need to focus instead on the brew time.

The longer you leave the coffee grounds steeping in the water, the stronger and more bitter your coffee will taste. 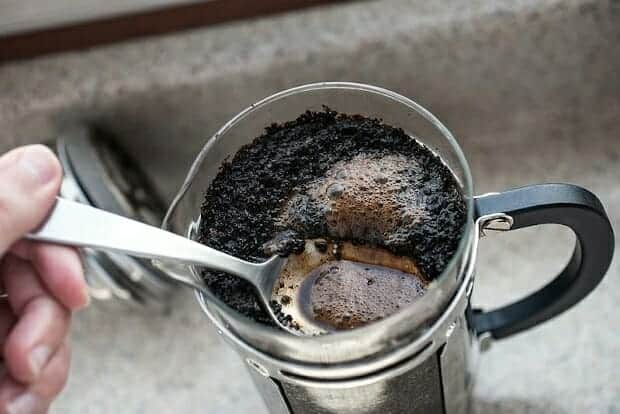 So now you understand the fundamentals of the immersion style of coffee brewing used in the French Press, we need to hone in on some suitable alternatives that utilize the same technique.

If you enjoy the coffee brewed in a French Press and you’re looking for an alternative, it’s no good replacing it with, say, a Chemex or a Hario V60.

As much as I love the Chemex, it offers up a totally different style of coffee.

It’s not full immersion but rather a pour-over method, so there is no real comparison with the French Press.

Best Alternatives To A French Press

Below I have picked out a few alternatives to French Press coffee that I think you’ll love. They all share the same coffee brewing style and are far easier to clean. 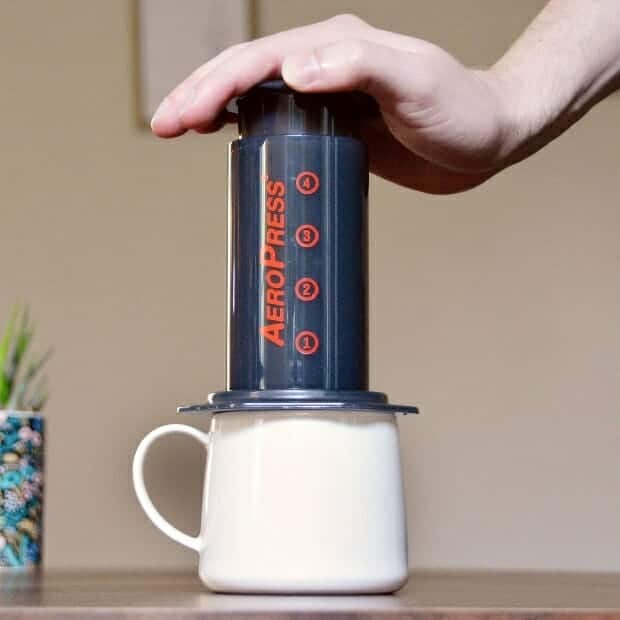 The first alternative to make the list of recommendations is the AeroPress.

This small plastic tube might not look like much, but don’t let its simple appearance fool you. The AeroPress produces some of the best-tasting coffee at home and is super easy to clean and maintain. 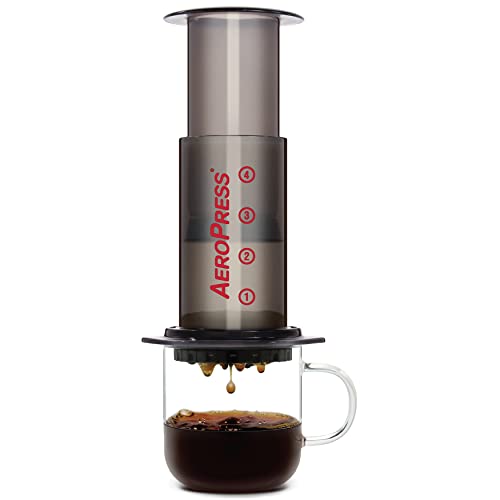 There are two ways to use an AeroPress, the traditional technique outlined in the supplied manual or the inverted AeroPress method.

I and many others prefer the inverted method over the standard technique because you have more control over the brewing variables without worrying about coffee dripping through the filter prematurely.

The AeroPress uses full immersion, but unlike the French Press, the AeroPress relies on paper or metal coffee filters.

These filters separate the coffee grounds from the brewed coffee as you push down on the plunger.

The end result is a full-bodied cup of coffee that’s on par with the French Press but with none of that unwanted sediment landing in your cup.

When it comes to cleaning, you push down on the plunger and shoot out the compressed coffee puck and filter directly in the trash or the compost.

A quick wash of the coffee filter cap and the AeroPress plunger and body, and you’re all set.

It doesn’t get much better than this if you’re on the hunt for an excellent alternative to the French Press. 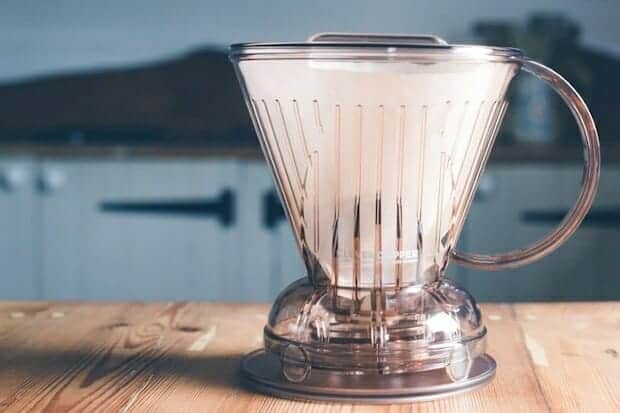 Anyone looking to replace their French Press with something else has to consider the Clever Dripper.

Coffee geeks around the globe praise the Clever coffee dripper as a simple brew method that is quick to clean and super easy to get a consistently good cup every time. 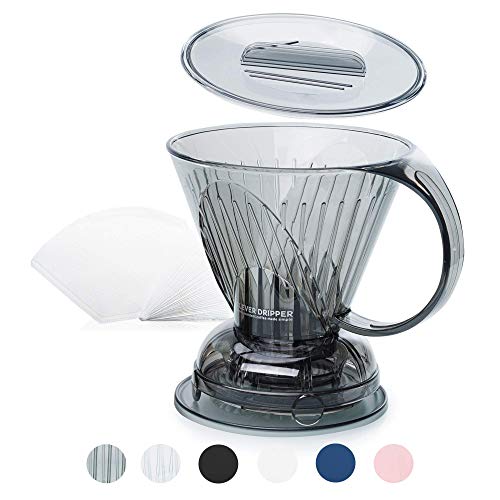 Now you might be thinking – isn’t that a pour-over coffee maker? Well, yes and no.

As the name suggests, this coffee maker is pretty “clever” and combines the brewing principles of immersion and pour-over in one device.

It does this by using a weight-controlled valve that sits at the base of the dripper cone. This clever design lets you suspend the coffee immersion process until you decide to release the coffee into your cup.

Once the valve is pushed up, your coffee will slowly drain.

It’s this combination of pour over-extraction combined with the more prolonged immersion of coffee grounds and water that produces a well-balanced cup with a delicate flavor that’s on par with the French Press. 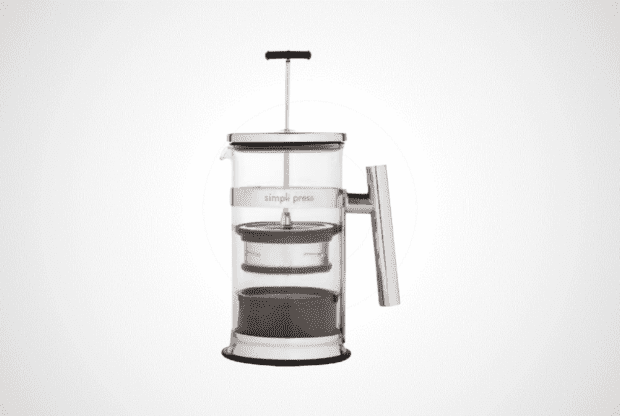 French Press without the mess is how I would describe the Simpli Press.

It uses the same brewing principles used in a traditional French Press, but the Simpli uses a clever system that locks the coffee away. 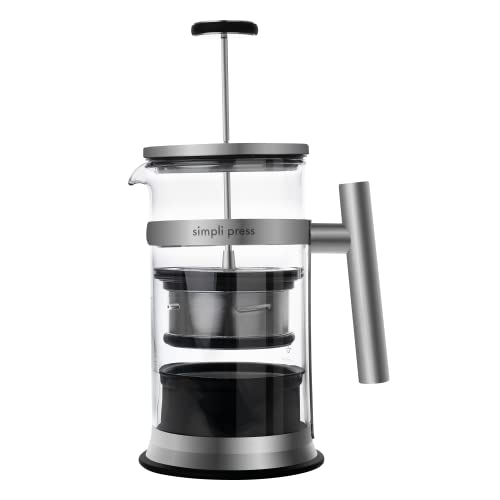 The coffee brewer looks just like a regular French Press but hidden inside you’ll find a coffee basket that holds the coffee grounds.

Just like regular French Press brewing, you immerse the coffee grounds inside water. The difference with the Simpli press is those grounds are locked inside a basket with a filter located at the bottom.

When you remove the plunger, you also remove the basket that contains the coffee grounds.

You then simply dispose of the coffee with little to no mess. Also, due to how the Simpli press works, you hardly have any coffee sediment inside your cup.

The Simpli Press is like a French Press 2.0 – More flavor and less mess. 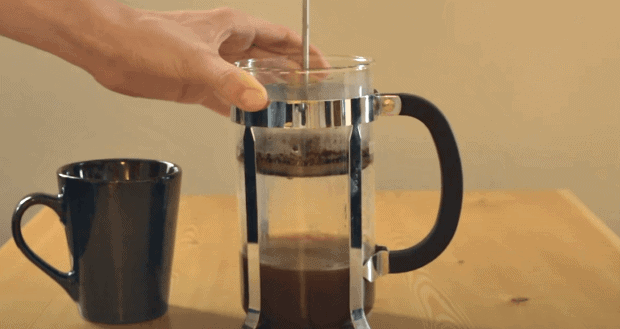 No, this isn’t some new method of contraception being divulged by a spotty teenager on Tik Tok.

It’s, in fact, a great way to stick with your good ole regular French Press, and by using this simple method and switching up your technique, you can cut the cleaning time in half.

The main difference with the French pull method is that you add your ground coffee after pushing the plunger to the bottom of the Press.

Take your rinsed empty French Press and push the plunger and filter down to the bottom. Next, add your coarse ground coffee so that it sits on top of the filter.

Slowly pour in your hot water as you usually do and allow the coffee to be steeped.

Gently pull up on the plunger once you’re ready to serve the coffee.

Instead of the coffee being left behind, it will rise up with the filter. Once you carefully remove the plunger, merely tap the filter and plunger to discard the coffee grounds, and a quick rinse takes care of the rest.

If you hate cleaning up and you’re looking for a good French Press alternative that still offers the same full-bodied cup of coffee, the AeroPress, Clever Dripper, and the Simpli Press tick all of the right boxes.

If versatility is something you want, the AeroPress should be top of your list.

But If you enjoy the French Press ritual, take a closer look at the Simpli Press. It’s the most comparative coffee maker you will find to the French Press, and it comes with no mess, sediment in your cup, or complicated cleaning.

📌 How Many Times Can You Use Coffee Grounds In French Press?

You can use coffee grounds as many times as you want, but we wouldn’t recommend it. When you brew coffee, you extract almost all of the oils, especially at the beginning of the brew cycle.

If you use the expired grounds again, you will have hardly any flavor, and the color of your coffee will be highly translucent, more akin to tea than coffee.

Trust us, don’t do it, you will be disappointed.

📌 Is The French Press Stronger Than Drip Coffee?

There would be no noticeable difference with all things being equal – the coffee to water ratios and type of coffee used.

Some people swear that the French Press produces a stronger coffee, but the truth is that it’s a trick on the brain.

Your taste buds are tricked into thinking French Press coffee tastes stronger due to the fine particles and coffee oils that slip through the mesh filter. When both of these react with your tongue, it sends mixed signals to the brain.

Drip coffee uses a paper filter to remove both the oils and coffee sediment fines, which gives a cleaner taste that can seem milder and less “strong.”

📌 How Do You Mimic A French Press?

If you don’t own a French Press or you’ve accidentally broken it, you can mimic the French Press brewing style, but you’ll have to tune into your inner MacGyver as it requires a bit of skill.

Just add your coarse ground coffee bean into a bowl. Pour in your boiling water and allow it to steep. Then gently pour the coffee through a strainer to remove the coffee sediment. This is a bit like “cowboy coffee” minus the cowboy!

Seriously, this has to be a last-ditch effort to get yourself a dose of caffeine. Have a cup of tea instead, instant coffee, or invest in one of our recommended French Press alternatives listed above.

Since the creation of BeanGround.com in 2014, Mark and a small circle of coffee hobbyists have been rigorously testing, reviewing, and researching coffee gear. In most cases, we have gone out and purchased the items ourselves with the sole intention of rating and evaluating.

In that time, we have built up a list of quality points to look for and what makes specific equipment better than others. We have cut through the noise and marketing hype that often surrounds products to give you our unbiased opinions so you can make clear decisions on your next purchase.
FacebookTwitterPinterestLinkedInEmail

If you’re a regular user of single cup coffee makers, like the Keurig, it’s probably hard to envision ever going back to a traditional drip coffee machine, especially after you have started to use those...

Do you love iced coffee? Well, you’re going to love Japanese Kyoto style slow-drip coffee even more! Let’s be honest, Japan has a cool and innovative way of doing almost anything, and their coffee brewing gadgets are no...

Spending three bucks for a coffee multiple times a day can quickly add up if you’re a college student and your average student budget can vanish pretty quickly. You don’t have to be majoring in mathematics to work out...

I’m sure we can all agree that the AeroPress offers near perfection when it comes to brewing great tasting coffee at home and on the road. But what if we said you could make your coffee even better? Have we got...