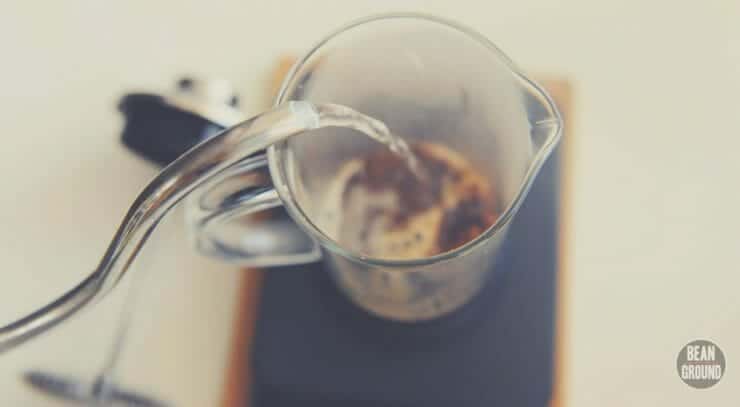 Mark Morphew
5 min read
Bean Ground is completely reader-supported. When you buy via the links on our site, we may earn an affiliate commission at no extra cost to you. Learn more

Out of all the different ways to brew coffee, the French press is one of the easiest and most forgiving when it comes to ratios. But to nail that perfect tasting cup of coffee, you need to at least follow some simple guidance; unless you enjoy drinking a cup of sludge.

The coffee to water ratio you ultimately decide to use will have a profound effect on the outcome of your brewed coffee; get it wrong, and you will have either over-extracted or under-extracted coffee.

General guidelines are readily available that explain which ratio of grounds to water you should ideally use based on a particular brew method.

However, you can use the advice rather loosely for the French press, and the grounds to water ratio frankly comes down to your preference, depending on how strong or weak you like your coffee.

In this guide, I will list the golden coffee ratios for the French press. You can use those next time you brew or use them as a guide and adjust accordingly.

Recommended Coffee To Water Ratio In A French Press

Let’s take a closer look at the coffee to water ratios for the French press; that’s why you’ve landed here after all.

This range is also referred to as the “golden ratio” because if you follow this equation, you’re guaranteed a perfect tasting cup of coffee, well, most of the time.

But in the world of coffee, nothing is set in stone, rules are meant to be broken, and plenty of people enjoy coffee outside of these ratios. But if you are completely lost and need a bit of guidance, you won’t go wrong using these as a starting point.

If you don’t want to pull out your calculator to work out the coffee grounds to water ratio, below, using the 1:18 ratio, I’ve listed three popular French press sizes.

You’ll know exactly how much coffee and water to use if you follow this simple table.

The 3-cup French press is probably the smallest size you’ll encounter, and the 12-cup is typically the largest sold.

But if you find that you need to work out the ratio for a different size, just take the volume of water and divide it by 18, which will give you the grams of ground coffee you need to add.

The French press ratio chart above uses 1 gram of coffee to 18 grams of water. This works perfectly well and produces a satisfying cup of coffee.

But here at Bean Ground, we prefer a slightly more robust cup of French press coffee and tend to use a 1:16 ratio.

As I mentioned at the beginning of the article, use the guidelines rather loosely and play around with the French press grounds to water ratios until you find the “sweet” spot which falls just where you like your coffee.

If you prefer a bolder, strong cup of French press coffee, use less water in your calculation. If you want it slightly weaker and more subtle, play around with the ratio and add more water.

Unlike other coffee brewing methods requiring more precise ratios because the parameters can’t be adjusted, the French press is more flexible. Other variables can be tweaked (to certain limits) to compensate for the coffee-to-water ratio used.

It’s all well and good discussing the best coffee grounds to water ratios to use in the French press.

But, if you don’t start with a solid foundation, and by that, I mean freshly roasted, high-quality whole coffee beans, you’re setting yourself up to fail.

The ratios won’t do you any good if you’re using mediocre coffee beans.

📌 How Many Tablespoons Of Ground Coffee For French Press?

We understand that every household doesn’t own a coffee scale, especially when you’re still new to the world of coffee.

With the best coffee scale measuring the golden ratios is easy – you simply weigh the water and the coffee beans, and the scale does the hard work for you.

But without a scale, you’ll have to get creative with your coffee ratio by using a tablespoon (tbsp).

It’s not 100 percent accurate, but it will get you by until you purchase a good coffee scale.

So to determine how many tablespoons of ground coffee for French press, you need to divide the amount of hot water by 18 or the ratio you intend on using, which will give you the grams of coffee required.

📌 What Is The Best Coffee Grind For French Press?

Pre-ground coffee is ground to a size that works well in automatic drip coffee makers, but it’s not so suitable for French presses. The small coffee grounds easily clog and slip through the mesh filter used in the French press.

This causes a lot of coffee particles to land in your cup, and it can also make the plunger a lot harder to push down.

What Is A Coffee Bloom? Why Does It Matter?

Are you struggling to brew a cup of coffee at home that tastes as great as a cup from your local coffee shop? You might think you’ve covered everything, ticked every box, and got yourself the best gear you can...

Why Is My French Press Coffee Grainy?

The French press is one of the most iconic methods of brewing coffee at home, and when you do it right, it produces a great-tasting cup. The beauty of the French press is its simplicity; you simply grind your coffee...