If you’ve just ventured into the vast world of home coffee brewing, you have probably noticed that some bags of beans boast about being 100% Arabica or even 100% Robusta or a blend of the two. So what are Robusta and Arabica and what exactly does this all mean?

​Once roasted, pretty much all coffee beans look the same. That being said I bet you didn’t realize that there are actually over 100 different species of coffee but when it comes to your daily brew, there are only two coffee beans that really matter.

​Okay, but what’s the actual difference between Arabica and Robusta coffee beans and does it make a difference which kind of coffee bean you use?

​So now you have a better understanding let’s delve deeper and take a closer look at these two popular coffee beans and what makes them unique and different in the world of coffee brewing.

Characteristics of Arabica and Robusta

​Robusta and Arabica for many coffee drinkers taste the same; after all, they’re both coffee right? However, there are actually a handful of distinctive characteristics that do separate these two coffee beans. 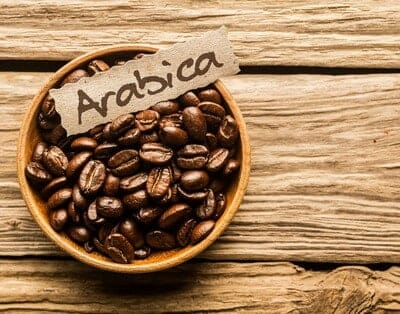 For starters, when you stop and take note of what you are drinking, you’ll quickly be able to pick out that Arabic is much sweeter than the Robusta.

​Arabica tends to have more sugary overtones, which many coffee drinkers prefer (if they know it or not) when compared to Robusta’s stronger, sharper flavor.

​Arabica also has far more nuanced flavors when put side by side with Robusta, and it is also common for Arabica to taste a bit nutty, fruity, and chocolaty along with other subtle notes. These additional flavors rarely appear in Robusta beans, if ever at all.

​Another distinctive trait that Robusta has over Arabica is the amount of caffeine found in the bean. Arabica actually has about half as much caffeine as Robusta. 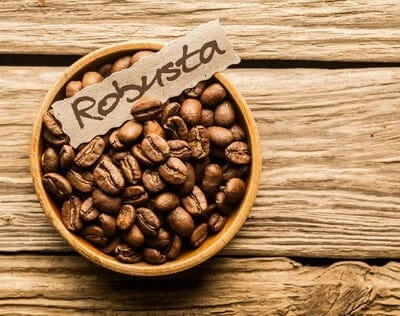 It’s also worth pointing out that caffeine is actually a natural pest control and helps fend off pests and critters during the most crucial time of the coffee plants life. This is probably one of the reasons why the Robusta variety is a lot cheaper to buy, due to the fact it’s a lot more hardy to pests and easier to grow.

​The only downside of the Robusta bean is that it tastes bitter, this is also primarily to do with the higher caffeine content. So it’s not uncommon the find a blended coffee that includes both Arabica and Robusta – the best of both worlds, you could say.

​Lastly, both of these coffee bean varieties grow at different altitudes. Arabica grows at higher elevations, and at these higher elevations, the climate is a lot harsher, so the coffee plants grow slower. Due to the slower growing cycle more refined flavors are produced once the beans have been processed, roasted, and ground for brewing.

​Another difference between Robusta and Arabica which I want to touch on quickly is the size of the coffee beans themselves; they are different. 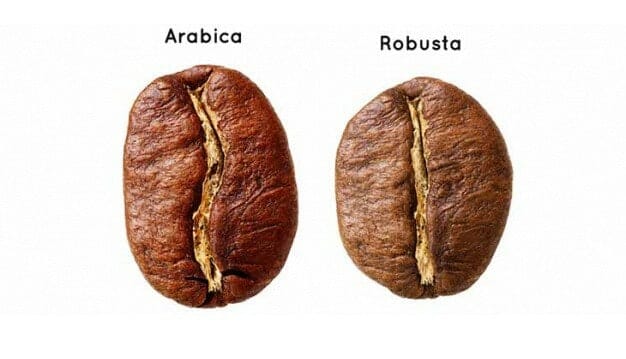 There are also very slight structural differences between the two, which probably explains why both of these coffee bean varieties roast slightly differently when under the same identical roasting conditions.

​As I briefly touched on above, Robusta beans are much easier to grow and cultivate vs. Arabica. Arabica plants can grow to up to about 4.5 meters tall. And as per the above illustration, the beans themselves are far more oval in shape when compared to the Robusta bean.

​Robusta plants, on the other hand, can grow up to about 6 meters tall and the beans have a more rounded shape.

​Due to the popularity of the Arabica coffee bean, there’s much more produced. In-fact, about 75% of the coffee produced belongs to the Arabica variety with only 25% going to Robusta. At the time of writing Brazil is in the number one spot as the largest growers of Arabica. Vietnam, on the other hand, is the top producer of the Robusta variety.

​Also just like the difference in the growing both these coffee plants there are also subtle differences in the levels of minerals and other chemical compounds found in both Arabica and Robusta coffee beans.

​For starters, Arabica contains roughly double the amount of sugars and nearly 60% more lipids when compared to Robusta beans. These differences definitely impact the taste of the coffee.

​Arabica coffee beans contain about 5.5% up to 8% of Chlorogenic acid whereas Robusta has 7% to 10%.

​I have really only touched on the surface of the differences when it comes to sugars and antioxidants, but as you can already see the chemical make up of both of these coffee beans is unique.

If you are feeling brave and want to experience Robusta coffee beans in all their glory, I highly recommend you give Death Wish Whole Bean Coffee a try. Trust me, you’ll be pleasantly surprised with the taste, I was! You can find Death Wish Coffee at Amazon.

Where are Arabica and Robusta Beans Used?

Between the two coffee varieties, Arabica is the most desirable species with coffee drinkers. However, Robusta does have its place in the coffee-drinking world, and you’ll be surprised to hear that Robusta is in some of the least desirable and some of the most prized brews in the world.

​For example, almost all of the cheap instant coffee is made from Robusta coffee beans. Which is understandable, seeing as Robusta is the cheaper bean and sells for less than Arabica because it’s less fragile and has a longer harvest season.

​But on the other end of the scale, Robusta is also the go-to bean of choice for some of the most revered Italian espressos.

​When Robusta is brewed in an espresso machine it wins hands down when compared to Arabica; there really is no competition. The Robusta bean produces as thick, rich espresso crema. So it’s not uncommon to find Robusta as the primary bean in almost all of the best Italian espresso coffee blends.

​Arabica is the Americans number one choice for brewed coffee. I think part of that is because nearly all Americans dislike instant coffee; which, remember is primarily made from Robusta beans.

​This trend is nothing new and in fact, the “gourmet coffee movement” of the past 30 plus years has had a lot to do with the change from Robusta over to Arabica. It’s not uncommon to find small to medium coffee roasters putting all of their efforts into Arabica over Robusta due to the high demand.