What is the World’s Strongest Coffee (Caffeine Overload!)

Being the caffeine addict that I am, I recently decided to unlock the realms of my mind that can only be reached by staying up, and wide-eyed all night after drinking some of the brands that stake the claim to being the world’s strongest coffee. Some of you might think I’m crazy to brew up these strong coffees, but I’m sure that there are a whole boatload of you wanting to sample these highly caffeinated brews too; if only once!

After searching around, I discovered that there are actually a handful of strong coffee brands that are all claiming the title of being able to brew the most powerful cup of Joe around. Death Wish Coffee (1), Black Insomnia (2), and aptly named Asskicker are a few coffee brands that stuck in my mind; but, there are a hell of a lot more. Today these popular highly caffeinated beverages are popping up everywhere.

To be considered for this outlandish title the amount of caffeine present in the coffee has to be huge and the only way of reaching this is by sourcing Robusta beans. Typically, most of the popular daily coffee blends use Arabica beans in their offerings. Arabica produces a great tasting, mild, and aromatic coffee and makes up about 70% of the world’s coffee production.

On the other hand, the less palatable Robusta species of coffee has a distinctive bitter taste, contains about 50-60% more caffeine than Arabica, and is cheaper to produce as it’s hardier and easier to grow. Robusta is typically used in more inexpensive instant coffee sachets, and its bitter taste is masked with sugar and artificial sweeteners.

With Robusta being the coffee with the most caffeine content it makes it the number one choice for brands looking to produce the strongest coffee in the world; but how do they mask the bitterness?

Makers of strong coffee search high and low for the best tasting Robusta beans which has sent them to all corners of the globe and with more demand for great-tasting Robust coffee farmers have now started to refine their farming techniques to producing better tasting bean. Some brands even mix arabica and Robusta into a blend to give you a more palatable cup but with an extra kick of caffeine that you would otherwise not get from Arabica alone.

With many different brands jumping on the bandwagon which one truly claims the title of being the “world’s strongest coffee?” Let’s find out. 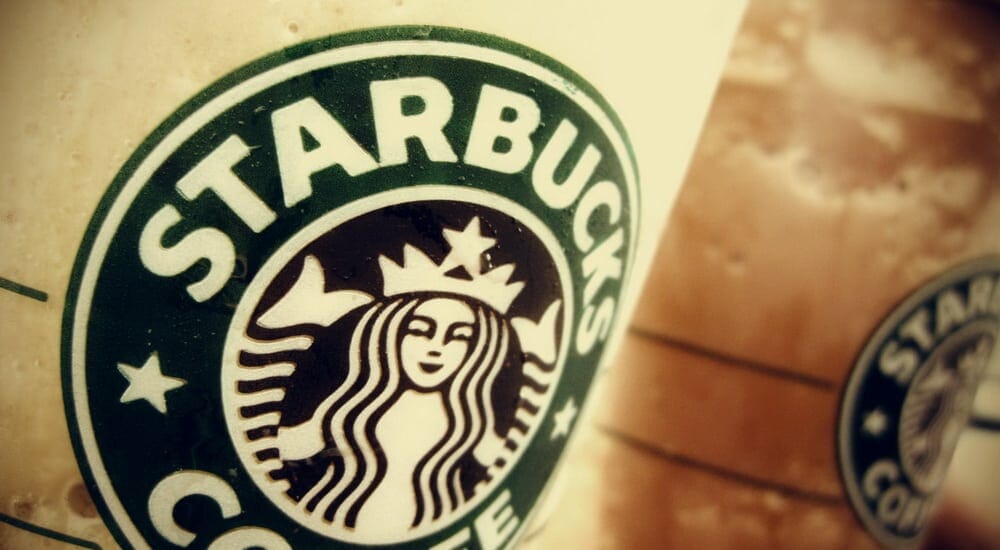 We all have our favorite coffee that helps us to function as a human being throughout the day, but what happens when you need a fix and you’re not in the office or at home. Don’t fret, if you’re looking for an extra caffeine kick while you’re out and about (and don’t want to make double brewed coffee in the office) these are some of the most highly caffeinated coffee drinks from Starbucks (you’re welcome!).

If you want to load up on the caffeine bigger is almost always better at Starbucks. Nearly all of their popular Venti sized drinks have an almost crazy amount of espresso shots, and the cold brew coffee is guaranteed to keep you up all night too!

How Much Caffeine is Too Much?

With all of these strong coffees taking center stage it’s probably a good idea to ask the question “how much caffeine is too much?”, Caffeine has its perks, but it can have potential problems too. Caffeine is used by millions around the globe to increase alertness, help to alleviate fatigue, improve focus and concentration, and not forgetting it also helps us to function as normal human beings.

But what’s the limit or the most coffee we can drink before we turn into a complete jittery mess, or worse still, hooked up and laying on a hospital bed.

Research suggests that up to 400 milligrams of caffeine per day is safe for most adults (3), that’s about the same amount of caffeine found in four cups of “regular” coffee. If you decide to have one of the stronger coffees you’re almost over your recommended limit with just one cup!

If you’re up for the challenge, below I have handpicked 6 of the strongest coffee brands in the world. Most of the coffees are made from purely Robusta beans, and a few are Arabica or a coffee blend of the two. But, be careful some of these are CRAZY strong, you’ve been warned! 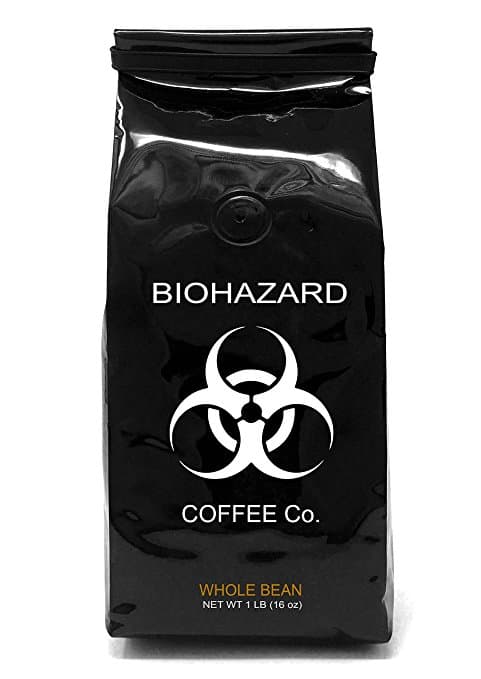 Caffeine: 928 mg (per 12 fluid ounces)
Bean: Robusta
Biohazard is the strongest coffee on the list at a whopping 928 milligrams per 12 ounces serving, that’s roughly 3.6 times more than a regular Starbucks! The Robusta beans have been carefully selected and have then been dark roasted to give you the strongest coffee possible.

Proceed with caution this coffee is seriously strong! 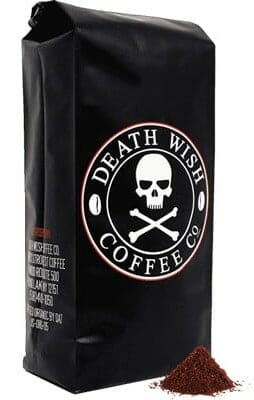 Caffeine: 728 mg (per 12 fluid ounces)
Bean: Robusta
Death Wish coffee could be called the birthing ground for the strong coffee phenomenon, and they were definitely the first brand to have an ambitious and costly marketing campaign with their Super Bowl advertisement (4) a few years ago.

Death Wish coffee is produced with 100% Robusta beans and has roughly two times the amount of caffeine than your average cup and is guaranteed to give you a decent buzz. It’s also worth pointing out that Death Wish is also a Fair Trade, is a USDA Organic coffee, and is Kosher certified.

A good popular choice for those of you looking for a bit more kick from your daily brew. 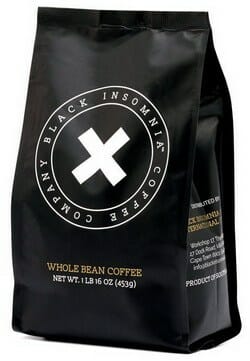 Caffeine: 702 mg (per 12 fluid ounces)
Bean: Robusta
Originally from South Africa, Black Insomnia has slowly started to spread around the globe, mainly due to being readily available through Amazon.com. Black Insomnia offers a tasty medium roast coffee with a surprisingly nutty and sweet flavor. The Robusta beans are a blend of Rwandan, Guatemalan, Brazilian, and Ecuadorian.

A good tasting strong coffee blend that will brew the strongest espresso you’ve ever had! 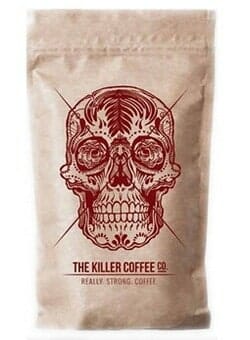 Caffeine: 645 mg (per 12 fluid ounces)
Bean: Arabica
Killer Coffee is Australia’s answer to the world’s strongest coffee. Made from 100% Arabica beans this coffee has a lot more flavor than the Robusta varieties above; to be honest, I’m surprised that they have been able to squeeze so much caffeine out of Arabica beans.

This dark roast Arabica blend has a smooth profile and goes great with a dash of milk. 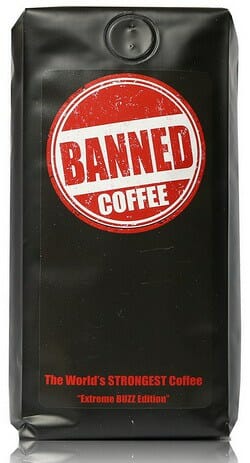 Banned Coffee boasts that they have three times the amount of caffeine than popular energy drinks. 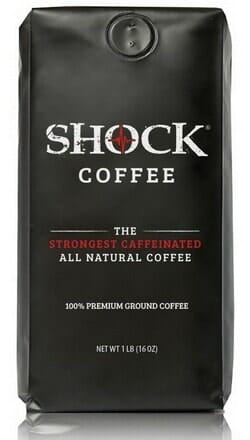 Caffeine: No caffeine amount stated but they claim to be 50% stronger than regular brewed coffee.
Bean: Arabica and Robusta

Shock Coffee has been in the marketplace for some time and could very well be the very first strongest coffee brand before Death Wish. The blend of Robusta and Arabica beans ensures that you’re not drinking a tasteless bitter brew. With roughly 50% more caffeine than other regular coffee Shock Coffee is sure to keep you wide-eyed on those late evenings.

It’s also worth pointing out that Shock Coffee is also the leading supplier of strong coffee to the United States Military.

Mixing Coffee Beans To Create Your Own Unique Blend

For most people, the thought of mixing coffee beans together has probably never crossed their minds. Why would you? The local roaster does an excellent job at crafting a decent palatable blend that’s full of...

Those of you that are regular readers of this coffee blog will already know I’m not a strong advocate for instant coffee. Sure, instant coffee has carved out its corner in the food chain and there’s nothing wrong with...

What Is Rainforest Alliance Coffee? Everything You Need To Know

Coffee is enjoyed by millions of people across the globe every single day. But, just like any consumable food harvested, coffee cultivation can negatively affect the planet and the surrounding environment if sustainable...

Anybody who’s anybody has heard of Colombian coffee if you haven’t where have you been? Out of all the established coffee growing regions, Colombia is regarded as the world’s largest and the producer of top-notch, high...