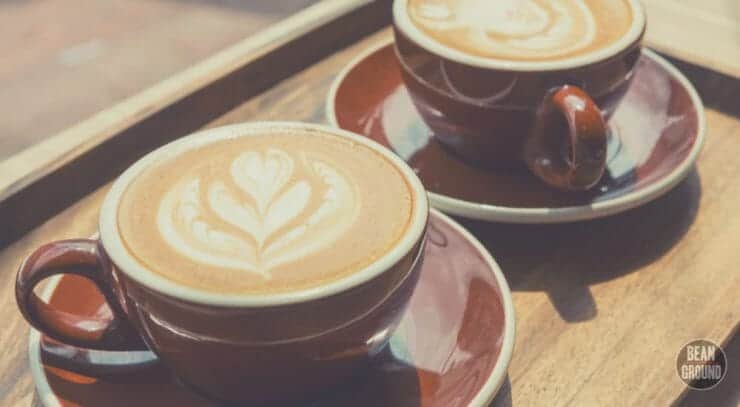 If you enjoy regular visits to your local coffee shop, chances are you’ve heard of a latte. But have you ever seen the less common flat white?

It’s made with precisely the same ingredients, and the appearance looks strikingly similar to a classic latte. But on closer inspection, a few key variables differentiate the two drinks.

You wouldn’t find a flat white outside of Australia almost ten years ago, yet today they seem to grace practically every café menu. But what exactly makes it different from the humble latte?

If you want to know the difference between a flat white versus a latte, keep on reading and discover how these milk-based coffee drinks stack up. 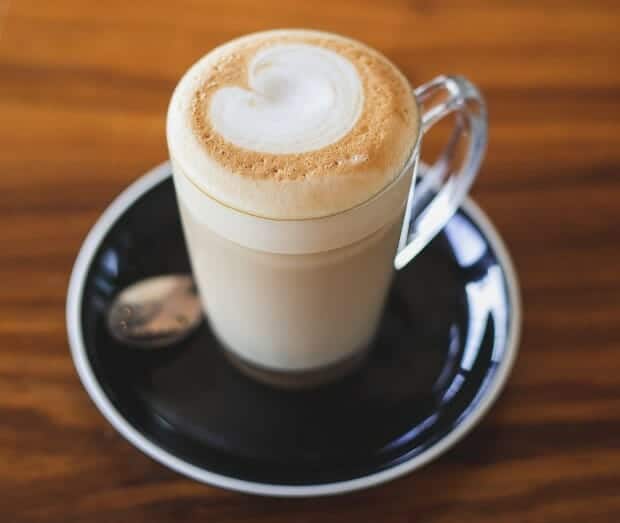 Let’s start with the drink you’re probably more familiar with – the latte.

It’s believed that the classic latte originated sometime in the 1950s and is supposedly the result of many Americans finding the cappuccino too strong.

By adding extra milk, they inadvertently created the latte, which took off in the 1980s and still remains one of America’s most popular espresso-based drinks.

The latte is a heavily milk-based drink, and even the word “latte” means milk in Italian.

The classic caffé latte or just “latte” consists of a single or double shot of espresso with lightly steamed milk added and a thin layer of milk foam spooned on top.

Historically the latte has been served in a tall 250ml glass with a single espresso topped with milk, and depending on the coffee shop, it may have some latte art.

However, today it’s pretty common to serve it from a bigger cup, and large sizes are now commonplace – a serving of 350ml with two espressos now seems to be the new norm.

Lattes can be served hot or iced, making them enjoyable throughout the year. The modern-day latte has strayed from its original roots and comes in a wide range of flavors with extra toppings and syrups.

Making one is relatively easy, and with a selection of the best coffee beans for the latte and a good coffee machine with a steam wand to froth milk, you can enjoy a café-quality latte in the comfort of your home. 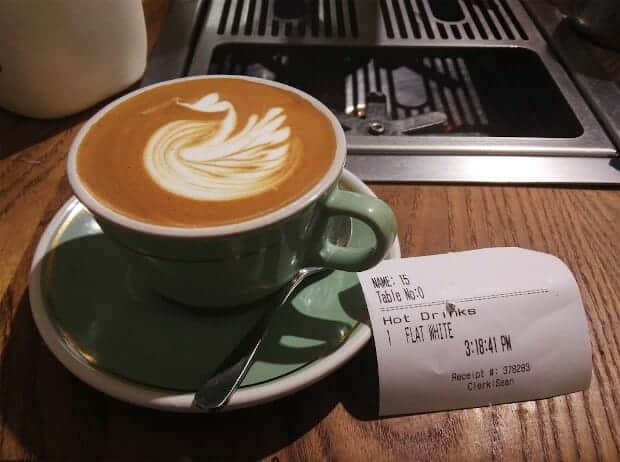 The flat white is the new kid on the block and made its appearance sometime in the 1980s in either Australia or New Zealand. Although the exact origin can’t be pinpointed and is still debated by the two countries even to this day.

Wherever it originated, the flat white eventually made its way across the other side of the world.

However, it wasn’t until the likes of Starbucks gave this espresso-based milky drink a platform and marketed it as a “bold” alternative to the traditional latte that it then started to gain traction with coffee lovers.

Compared to the latte, the flat white shares many similarities – both use espresso and milk froth. Having said that, the creation of the flat white does tend to vary depending on which coffee house you’re ordering from.

The flat white has less milk than a latte, so you can expect it to have a more robust coffee flavor; although both drinks use the same amount of espresso, the flat white is less diluted.

Really you can think of it as kind of like a “milk-based Americano.”

What separates the two coffee drinks ultimately comes down to ratios and technique. The flat white, for instance, has a distinctive microfoam top.

Essentially, microfoam is steamed milk that has been aerated just enough to form dense tiny bubbles. The aerated milk is then carefully poured over the espresso until it reaches about an inch from the top of the glass; it’s then poured quickly to finish.

This technique produces the bubbly top that gives the flat white its classic looks and differentiates it from the latte.

It’s All About The Milk

Both the latte and a flat white use espresso, so the best way to tell the two drinks apart is by taking a closer look at the milk – it’s all about the milk!

A latte is made using steamed milk and a 5mm layer of milk foam on top.

In contrast, the flat white is made with microfoam.

Microfoam starts its life as regular steamed milk, but with a bit of extra aeration, you end up with microfoam.

Microfoam has many tiny air bubbles, is much more velvety in texture, and has a distinct glossy finish.

Most people forget how vital milk is when making good coffee. When milk is frothed using a steam wand, three distinct layers form:

How the milk froth is poured into both the latte and flat white is also different. 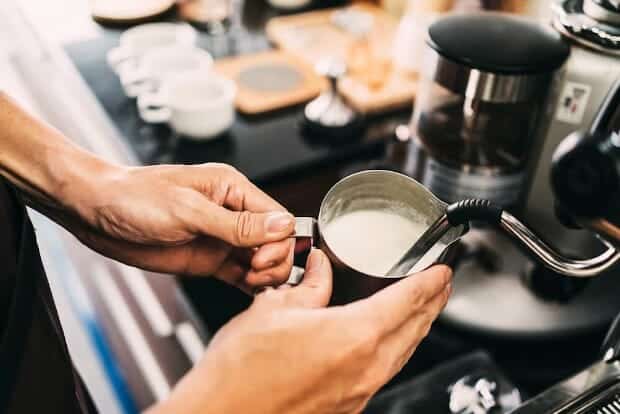 When you’re making a latte, you hold back the layers of foamed milk with a spoon, gently pour in warm textured milk, and then finish with a spoonful of foam on top.

When you’re making a flat white, you only need to add the microfoam to your espresso – that’s it.

The process of “stretching” the milk by frothing, folding, and then swirling is a technique that blends the large bubbles and the liquid milk to maximize the amount of microfoam.

Are The Serving Sizes Different?

Step into any cafe around the globe, and you’ll be served varying sizes of both a latte and flat white.

Yet, most coffee shops do follow a loose set of guidelines, and you can typically expect a latte size of about 240ml and a flat white about 160ml.

One thing that doesn’t change is the amount of espresso served in them, and it’s safe to assume that the preparation of espresso is consistent across both the flat white and the latte.

You can have a double shot or a single shot of espresso in a flat white or a latte.

The fundamental difference between both espresso drinks is the milk used in the preparation.

If you’ve stuck around until the end, I hope you now understand the difference between a flat white versus a latte.

The espresso (single or double) is the same in both drinks, and it is the one element that should be the same whether you order a flat white or a latte in New Zealand, the United Kingdom, or any other cafe around the globe.

The milk preparation and quantity are the key ingredients determining whether you’re drinking a latte or a flat white.

Which should you choose?

If you enjoy a smaller drink with a strong flavor of coffee and a velvet-like mouthfeel, try ordering a flat white coffee next time you visit your favorite gourmet coffee house.

For those who prefer a slightly larger drink that tastes milky but still has a subtle flavor of coffee, the latte is a great choice.

📌 Is A Flat White Stronger Than A Latte?

Both milk coffee drinks are made with either a single or double shot of espresso. So the cafe latte and the flat white will contain roughly the same amount of caffeine, depending on the cafe and the coffee beans used.

For reference, a single shot of espresso contains roughly 64 mg of caffeine.

📌 Does A Flat White Have Less Calories Than A Latte?

Yes, a flat white has fewer calories than a latte. The bulk of the calories in any coffee drink tends to come from the milk used.

As I’ve mentioned in this article, each espresso drink has a different milk ratio with slightly different preparation methods. If the barista prepares the drink with cream milk, a typical 16oz Starbucks flat white contains roughly 220 calories with about 11 g of fat.

📌 Is There Sugar In A Flat White?

The traditional flat white is served without sugar or any extras such as coffee syrups or other toppings.

However, the natural sweetness will come through from the whole milk and the espresso shot. A 16oz Starbucks flat white made with whole milk contains about 17g of sugars.

How To Clean A Keurig Needle? (Quick & Easy)

If you own a Keurig, chances are you already know that they require a lot of ongoing maintenance to keep them in good working order. These coffee pod machines are incredibly convenient, but it’s crucial to keep...

How Many Bars of Pressure for Espresso

In the world of coffee, it’s “pressure” that differentiates the humble shot of espresso from any other type of coffee. Various machines have different bars of pressure to extract the coffee with very...

We are gathered here today to honor the memory of Mr. Blonde. Whoa. Scrap that. Are dead espresso shots actually a thing? Anyone who enjoys a rich and creamy espresso shot is likely familiar with the term “dead...