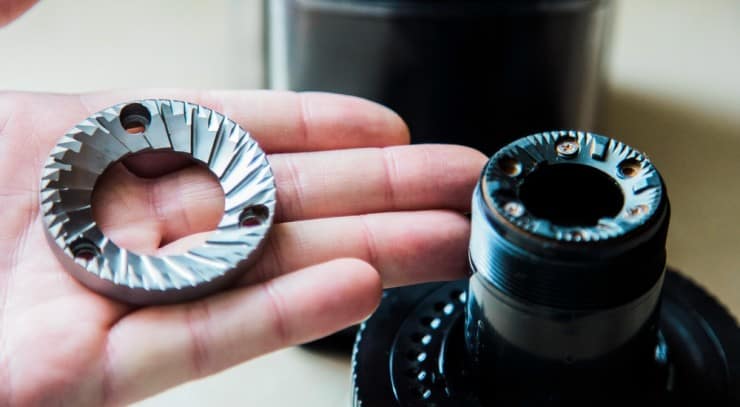 Not all burr coffee grinders are equal, and the debate between conical and flat burrs is an ongoing discussion for coffee geeks trying to decide which type of burr grinder is the best.

​For those of you that don’t know, the burrs are the part of the coffee grinder that grinds and crushes the coffee beans. There are two different burr grinders a conical and flat plate.

​Flat and conical burrs actually both grind coffee in the same way. A serrated or toothed ring moves over another ring that has jagged edges. As coffee beans are pulled between both of the rings, they’re then ground.

​The differences between the two are in the shape of the rings, and this is what can often be confusing.

​To be honest, any burr grinder is going to do a decent job of giving you a consistent uniform grind. However, there are some subtle differences between a conical and a flat burr grinder that coffee geeks will lose sleep over.

​That being said, for likes of you and me, any burr coffee grinder is going to be better than a blade grinder such as the KRUPS F203, and the differences between owning a flat versus a conical burr grinder aren’t really worth losing any sleep over.

​But I’m sure some of you reading this will find yourself tossing and turning in bed worrying about the differences, so in this article, I will delve a little deeper.

Hopefully, after reading this, you’ll have a better understanding of just how much the flat and the conical burr grinders differ and also discover if one or the other really does make a difference to your final brew.

​What is a Conical Grinder? 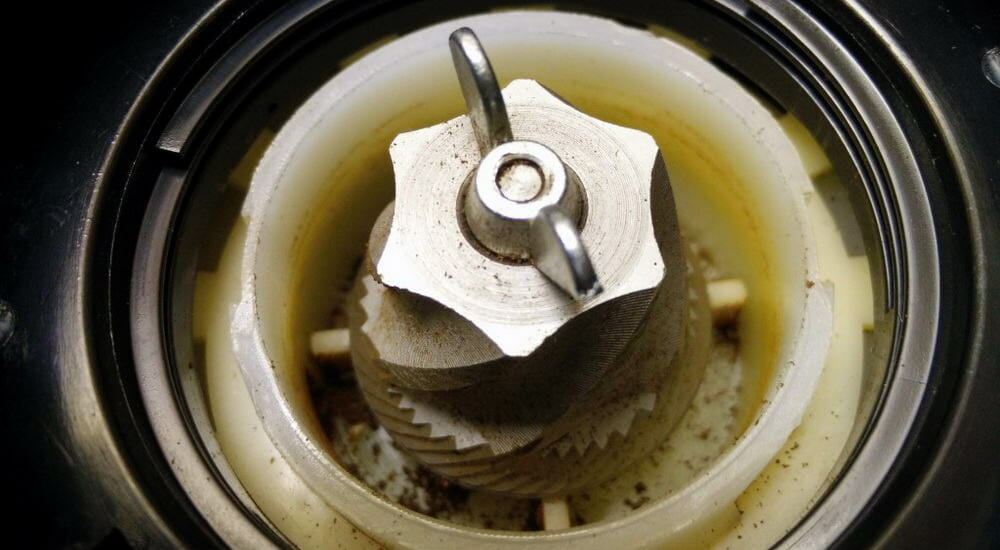 ​The burrs in this particular grinder have a cone-shaped ring that snugly sits inside another hollow cone-shaped ring. Your whole coffee beans are pulled down through the conical burrs at a slight angle, but the path is essentially vertical.

​Compared to flat burrs, conical burrs typically rotate at a lower rate which means that they tend to produce less noise. Because they turn more slowly, they also do not create as much friction as the alternative flat burrs.

​Friction means heat and any excess heat at this stage is not going to do your freshly ground coffee beans any good. In fact, it can alter the taste of your final brew due to loss of flavor through the coffee’s oils being vaporized.

​One of the disadvantages of conical burr grinders is that they often demand a slightly higher price than the flat burr alternatives, but if you’re serious about grinding your coffee, the few extra bucks is a worthwhile investment.

​What is a Flat Burr Grinder? 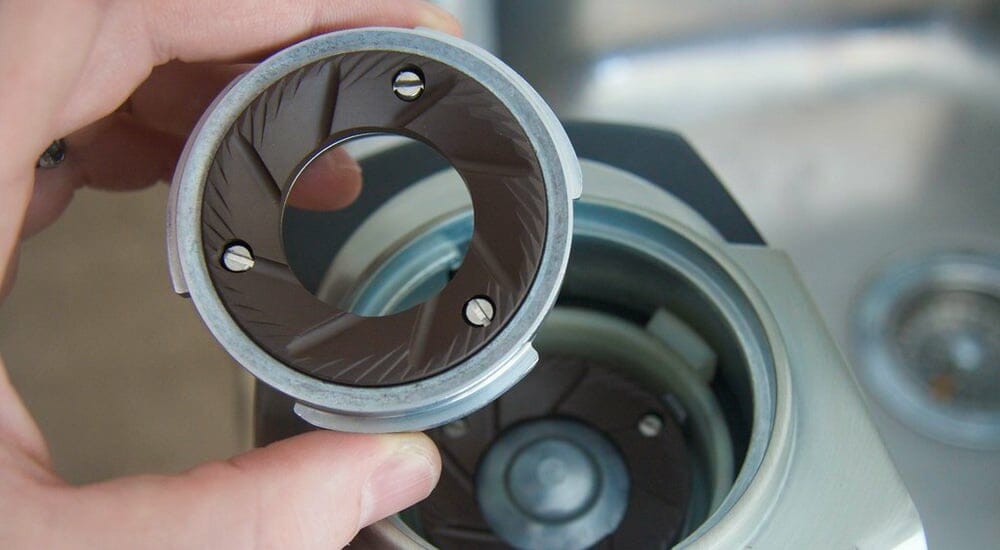 The flat burr coffee grinder is slightly different and has two rings of burrs which are placed horizontally to the ground; one ring faces up while the other faces down.

​As you grind your whole coffee beans, the beans fall between the two burrs and then drop again making two 90-degree turns. Rather than having ridges that crush and grind the beans, the grinding is carried out by the “teeth” which are on the edges of the flat plates.

​A few disadvantages of flat burr coffee grinders are that they tend to get clogged up especially if you are grinding up large quantities of whole beans.

​They also produce more heat than the conical burr alternative which can adversely affect the taste of your coffee which I talked about above. And finally, you may find that flat burrs will produce a static charge which can cause your freshly ground coffee to become stuck to the sides of anything it touches especially plastic bean hoppers or ground coffee collection boxes built into your grinder.

​When it comes to waste one of these burr coffee grinders seems to produce far more.

​Now as you know good coffee isn’t cheap, so the thought of losing some isn’t really an option. Plus, every tiny ground counts when you’re aiming for perfection.

​Unfortunately, the flat burr grinder doesn’t really understand the concept of waste, as well as the conical burr grinder, does.

​Due to the flat design of the grinding wheels, some grounds will become trapped in the grinder. These trapped coffee grounds can go bad and become stale and can contaminate other batches, depending on how regularly you clean your grinder. This contamination with the old ground coffee can adversely affect your final brew. 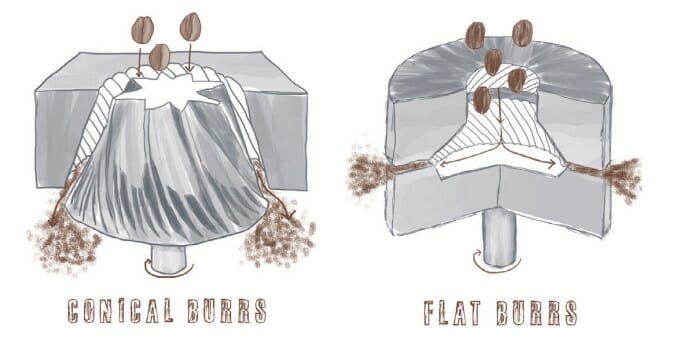 A conical burr does not suffer from this problem because grounds flow straight down, and a quick flick of a brush will leave your coffee grinder clean and ready for its next use.

​Coffee Geeks do Have a Favorite

​Coffee geeks do have a preference when it comes to both flat and conical burr grinders. Most also have vast experience to base their different theories on, that being said only a few have been scientifically proven, so most of these theories fall under personal preference.

As I talked about above flat burrs, tend to retain and hold more used grounds than conical burrs do. This is probably the most valid of all the below theories and one to take into consideration when buying a new burr grinder.

​I’ll Leave You With This

Both a conical and flat burr grinders are an upgrade from a blade coffee grinder so you really can’t go wrong with either one. However, if you really had to choose between flat plates and conical plates, the conical grinders produce a better coffee grind size and WINS my vote.

Content Navigation show
1 ​What is a Conical Grinder?
2 ​What is a Flat Burr Grinder?
3 ​Conical or Flat Grinder Which Produces More Waste?
4 ​Coffee Geeks do Have a Favorite
5 ​I’ll Leave You With This
FacebookTwitterPinterestLinkedInEmail

Espresso Leveler vs Tamper: Use Only One or Both?

A barista during a typical shift will pull hundreds of shots of espresso. One of the fundamental skills needed by a barista to pull a decent shot is to evenly distribute and compress freshly ground coffee inside of the...

In recent years there’s been a noticeable increase in the demand for milk alternatives for coffee. This surge has mainly been driven by newly published (1) health concerns regarding cow’s milk, dietary restrictions, as...

Are you wondering if that dusty old bag of coffee is bad? Does coffee go bad or expire after so long? And how long does coffee last? Those questions and others are answered in this article. What I can say now is that...

If you own the Hario Mini Mill, I’m sure you’ve discovered that the consistency of the grind could be a little better. Don’t get me wrong, I love this pocket-sized grinder but there’s one problem, the coarse grinds are...