How many of you try to mask the bitterness in coffee by adding in copious amounts of sugar or artificial creamers? Apart from piling on the pounds due to the additional calories, you’re also ruining the taste of the coffee.

In my opinion, coffee should be taken black. But, If you can’t stomach pure black coffee try adding some salt to your brew.

Adding salt in your coffee, have you gone mad? No, I’m still compos mentis, hear me out. As strange as it sounds adding salt to coffee is a great idea and others agree. I’m sure after you’ve read this blog post you’ll agree. 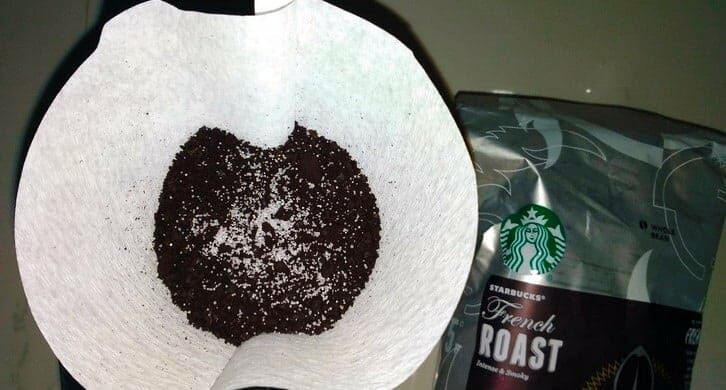 In a nutshell, sprinkling salt over your coffee grounds helps to counteract some of the bitterness in coffee and also rounds out its flavor. Seriously, I’m not just making this up, it’s even backed by science.

I’m sure you’ve all had a cup of coffee that was more bitter than usual, and there’s a reason for it. A common misconception regarding the bitterness is the amount of caffeine in the beans, while this is part of the cause it isn’t the main reason.

The good news is that these bitter compounds are antioxidants which is a good thing, but surprisingly, they are not present in the raw green coffee beans and only appear when the beans are roasted.

Light to medium roasted coffee beans typically have a higher amount of Chlorogenic acid lactones present which is the dominant reason for the bitterness. The darker you go with your roast level you will have more Phenylindanes compounds present.

Phenylindanes are produced when the Chlorogenic acid lactones are broken down by the longer roasting process. These compounds tend to leave a harsher and more lingering bitter taste on your palate.

So unsurprisingly, the darker your roasted coffee beans the more bitter your brew will taste.

But, all is not lost – salt can help with that bitterness!

How Does Salt Reduce the Bitterness?

It comes as no surprise that your tongue plays a role in acknowledging the bitterness found in coffee. Your tongue can identify five of the basic food types: Bitter, Sweet, Sour, Salty, and savory Umami flavors.

Research shows that the biological mechanism for producing Sweet, Salty, Sour and Umami share many similarities. Salt, while being an identifiable taste itself, works to amplify these other flavors. Just like adding a pinch of salt to your cooking to help elevate the flavors.

However, the bitter taste on the tongue works in a different way. Instead of the normal reaction on the tongue, the taste buds release a calcium ion which in turn transmits a ‘bitter’ signal to the brain.

… And this is where salt comes into play.

The chemistry behind this is still unclear but what scientists do know is that salt in coffee overrides the reaction on the taste buds which thereby helps to mask the bitterness of the coffee.

This Isn’t a new Trend!

Adding salt to your coffee isn’t a new trend thought up by a tattooed, bearded barista wearing skinny jeans. It’s been around for quite some time and a pinch of salt has traditionally been added to coffee in places such as Northern Scandinavia, Turkey, Hungary, and even Siberia.

This salty tradition is thought to have begun in coastal regions around Europe where the sea joins the internal rivers inland and locals used the brackish to brew up their coffee.

The brackish water is typically less salty compared to seawater, brackish water has a salt content of roughly 0.5-3%, which is lower than the average 3.5% found in pure seawater. The final brew would have been foamier compared to coffee we all know and love today.

You Could be the Reason Your Coffee is Bitter!

The roast level of your coffee beans can’t take all the blame for the bitterness, your brewing could be the problem.

I recommend that you look at these two articles both will give you an insight into brewing ratios and the freshness of your beans.

Is The Coffee Roast Date Important?

Best Way to Add Salt to Your Coffee 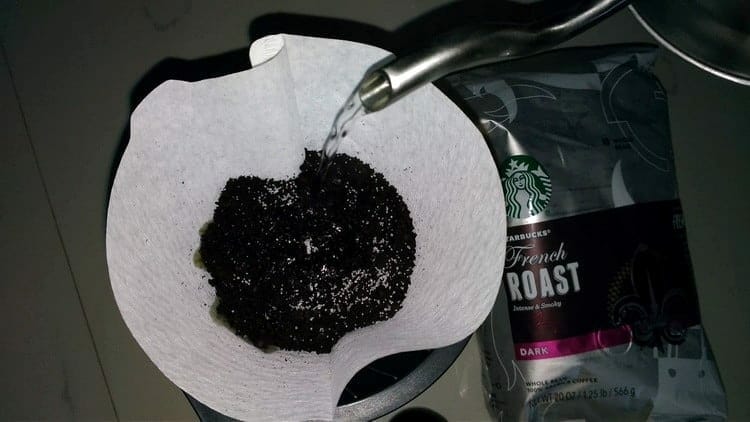 There really isn’t an exact science on how to add salt to your coffee. However, I stumbled across this suggestion by celebrity chef Alton Brown. He advises adding just a quarter teaspoon of salt to roughly 10 ½ grams of ground coffee.

This should be enough salt in the coffee to neutralize any lingering bitterness that might be present in the beans and it will also help to pull out the additional sweetness that might otherwise go unnoticed.

When it comes to the brewing coffee, salt can be used in any method albeit manual pour over, auto-drip machine, or even an AeroPress; to name just a few.

You can either use Alton Brown’s suggestion and add salt to the coffee grounds just before you brew or another option is to add a pinch of salt to your coffee once it’s brewed. If after tasting the coffee you find it on the bitter side sprinkle some salt to help balance out the flavors. 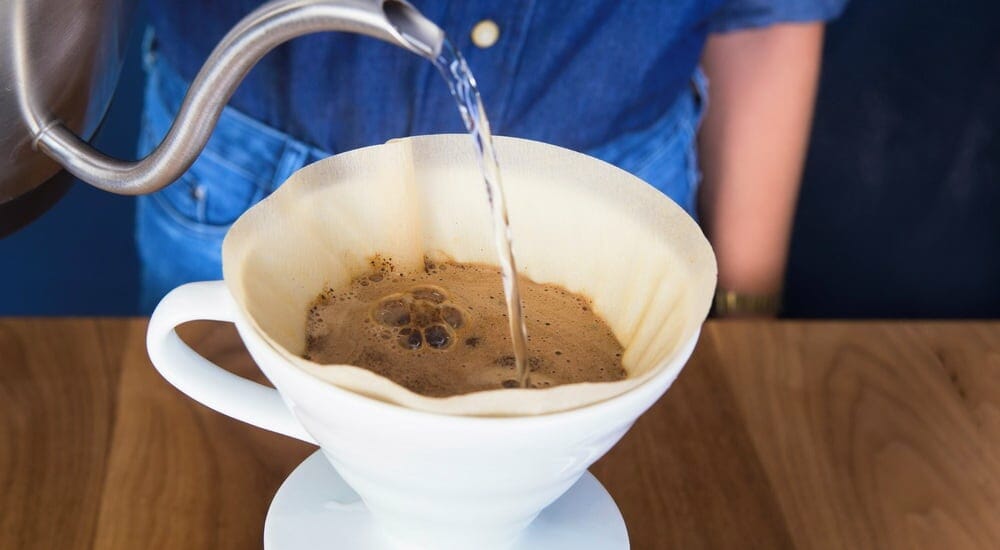 Any Health Benefits for Adding a Pinch of Salt?

By drinking coffee you’re already reaping some health benefits. Gone have the days where coffee was touted as being unhealthy the latest research is out and coffee is good for you. Coffee is packed full of antioxidants and much-needed nutrients such as Magnesium and Potassium, to name just a few.

Studies also suggest that drinking up to four cups of coffee a day can help to lower your risk of certain debilitating diseases such as Alzheimer’s and Parkinson’s.

Now getting back to Salt.

Now drinking coffee throughout the day does have a slight a negative outcome, it makes you want to urinate due to the caffeine in the coffee having a diuretic effect.

Yes, your cup of coffee is potentially causing your system to flush out the salt and if you don’t keep your sodium chloride in check, your body could become depleted of this essential nutrient.

Studies show that drinking just four cups of coffee per day can cause you to flush down the toilet up to 1200 mg of sodium, which, funnily enough, is roughly the recommended daily amount you should be consuming.

I know the chances of you becoming deficient in sodium chloride due to drinking coffee are slim; we get salt in almost everything we eat especially processed foods, so there’s no reason for your levels to drop dramatically.

So, getting to the point. If you drink a lot of coffee throughout the day adding a sprinkle of salt to your coffee with not only remove some bitterness but it will also help to keep your sodium chloride in check.

As great as coffee is, unfortunately, there are some of you that suffer from a sensitive stomach and the acid in the coffee can cause discomfort. If you’re one of the unfortunate few who suffer from acid reflux, you should try brewing with dark roasted coffee beans.

I recommend that you stay clear from lighter roasts as they typically contain a higher acid content. So switching to a dark roast, choosing a good quality Arabica, could solve your acidity problems.

I actually wrote a full blog post on the best low acid coffee brands, I recommend that you give it a read if you suffer from a sensitive stomach and can’t live without your cup of Joe.

However, if all else fails sprinkling of salt over your coffee can save the day.

Along with reducing the bitterness, salt can also tame the acid in the coffee – don’t believe me? Go on, try it and let me know how you got on.

Swap Out Sugar and Milk For Salt?

All coffee will have some form of bitterness, that’s just how coffee is, sure, some roasts and origins will have more bitterness than others. I prefer my coffee black and politely decline when offered milk and sugar. However, if you normally add sugar, milk or cream to your coffee to counteract some of the bitterness I recommend that you try adding a pinch of salt instead.

Ditch those creamers – the coffee will thank you for it!

The problem with adding sweeteners to your coffee is that you’re masking the great flavors found in the coffee. I know I would rather taste the subtle nuances of pure black coffee than a chemically manufactured creamer.

Sure, taste is subjective, I understand that. But, if black coffee makes you grimace try adding a pinch of salt before you reach for sugar or a creamer. I can guarantee that it will help to cut out the bitterness and acidity and will smoothen out the flavor and make it more mellow.