When I set out to find some American coffee machines, I didn’t realize just ho hard the task would be, because nowadays it seems like everything is made in China. I can fully understand why USA manufacturers prefer to have their coffee makers made overseas after all these big companies have shareholders and they also need to keep costs to a minimum.

Thankfully, there are still a handful of coffee makers that are made in the USA. These brewers are actually hard to come by, and I have had to do some real hunting to uncover real American made coffee makers.

One of the problems is that many may seem like they are USA made coffee makers but when you start to look closer they are in fact only assembled in the USA, and the parts are manufactured elsewhere. Keep on reading to see my recommendations.

Coffee Makers Made In USA

At the time of writing all of the below coffee makers are indeed made in America. However, companies are frequently changing how and where they manufacture their coffee brewers, so I suggest that you still double check with the manufacturer before making any purchasing decision.

BUNN coffee makers are some excellent durable machines and there’s a reason why they are the number one choice for hotels and commercial establishments, they are built to last! According to the BUNN website models GR, BX and BT are made in Creston, Iowa.

The popular BUNN Speed Brew and Velocity Brew are both made and assembled in the USA. Let’s take a closer look.

The Velocity Brew BT may look like a simple coffee maker but don’t let that fool you because this American made coffee maker can brew 4 to 10 delicious cups of coffee in under 3-minutes – it’s fast!

BUNN has tried to lose the industrial look with the Speed Brew, and this brewer has been designed to appeal to home coffee drinkers rather than commercial establishments.

One of the best manual pour over coffee makers is actually made in the USA, in Massachusetts. The Chemex has a cult following among coffee geeks and coffee lovers around the globe. It does take a bit of practice, but once you’ve mastered the Chemex, you’ll never want to brew your coffee in anything else. 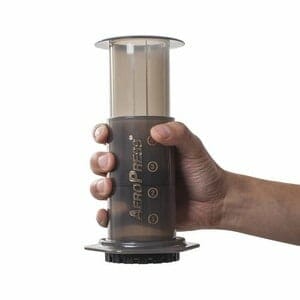 If you don’t already own the AeroPress, you’re missing out on great tasting coffee. The American made AeroPress is proudly manufactured in Palo Alto, California. This manual coffee brewer can knock out coffee that’s close to an espresso shot without you having to invest hundreds of dollars on a full blown espresso machine. The AeroPress also has a cult following, various “brewing recipes” and they even hold an official AeroPress Championship where many baristas battle it out for the best recipe. Check out my Inverted AeroPress brew guide. 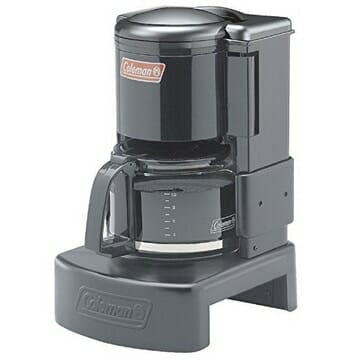 Going on a camping trip and still want to brew great tasting coffee? I highly recommend you take a look at the Coleman Camping American made coffee maker, it’s perfect for your coffee travel kit. The Coleman has been designed to be used with 2 or 3 burner camp stoves, and it can brew enough coffee for up to 10 people.​ 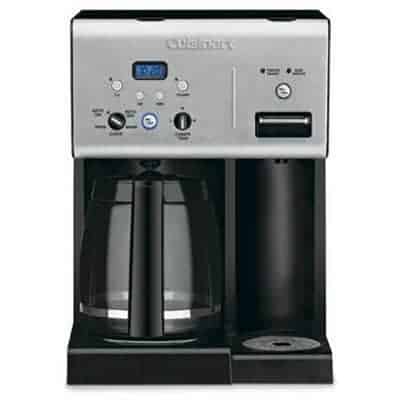 Most of the Cuisinart coffee makers are manufactured in China. However, the Cuisinart CHW-12 Coffee Plus is still an American made coffee maker. The Cuisinart can brew a full carafe of coffee on the left and a single cup or travel mug on the right. To be honest, it looks and operated in very much the same way as the Hamilton Beach FlexBrew, but the Cuisinart as the advantage of being made in the USA.​